There are few bands in the pantheon of modern rock music more underrated than Polvo. Formed in the depths of a North Carolina winter twenty years ago, the four-piece have steadfastly pursued a career that has prized artistic progression and expression over commercial success. Two decades on, things are somewhat different for guitarist and singer Ash Bowie, even the Carolina climate – ” It’s so warm here, it’s like Florida.” Ten years after they went their separate ways, Polvo reformed in 2008 at the behest of the Explosions in the Sky-curated All Tomorrow’s Parties festival. Their comeback was cemented when they released ‘In Prism’, a startlingly good album that saw the band not just picking up where they left off – as articulate, passionate and uncompromising as ever, but developing the band’s complex aesthetic even further.

Irish fans will get a chance to witness the Polvo live show for the first time ever at the Workman’s Club this Friday, are the band packed and ready for the trip over? ” No, not at all! I mean, we’ve never been to Ireland as a band. I personally have never been there. We’ve been to the UK a couple of times but we’ve never been to Ireland. What’s the weather like there?” After a brief diversion on the topic of our autumnal clime, we move on. The Polvo touring schedule is pretty sparse even now, is there a reason for that? ” Yeah, it’s a lot of work mainly. I work, our drummer Brian is back in school too, one of us works in a bar, another works two jobs. It’s hard to find the time.” There can’t be that much time to rehearse as a group then either? ” Lately no, not that much. We had a ten hour session last Saturday when Dave (Brylawski, guitarist, currently living in LA) came up which was pretty good though. We ran through some new material, it was good. The Dublin show could be a little rusty!” So what’s it been like then to get back out on the road over the last year or two? ” I always enjoy it, especially now that we don’t get out that much. We have a good time.” Since ATP in 2008 the band have played a lot of festivals, ” about half and half, fifty percent festivals, fifty percent club shows” , including the Merge 20th anniversary festival last year, which apparently didn’t go that well – ” We were too loud, too loud on stage. It started out kind of weird and we fucked up a song we wouldn’t usually fuck up. It was hard to get our bearings after that. I think it had it’s moments but it just wasn’t very good. We came on after Lambchop too, and they were so good. Usually, with a loud band on after a quiet band it works out well for the loud band but it really didn’t this time.”

So what’s the plan for after Dublin? ” Well we’re playing London the night after. And then we’re back to Texas to play a festival in Austin. Then we’ll probably take a little while to think about a new record, hopefully get into the studio some time in the next couple of months to work on that.” With ‘In Prism’ imprinting a certain high-fidelity sheen on the Polvo sound, will this new record follow the same trajectory? ” Yeah, with In Prism we definitely spent a bit more time on it. I don’t think it’s over-produced but we concentrated more on the overdubs and really made sure everything was right. Just because we were able to you know, we didn’t really have that option before. So I think the new record will be quite like that, it won’t be that different from the last one in those terms. We’ll probably do some of the recording ourselves, get as much of the tracking done as we can. There’s no reason not to.” Does this herald a return to a more DIY attitude throughout the band, such as with the release of their debut 7″ back in 1991 on their own Kitchen Puff label? ” There’s a business aspect to that which we don’t really have the time for now, you need to deal with distributors and press and all that stuff, it’s too time consuming. It was very cheap to do then too.”

Do the band feel any more or less pressure with a new album, considering ‘In Prism’ was the comeback statement? ” Not really, I mean, we feel a certain amount of pressure not to take a step back. The next album has to be as good or better than the last one.” It’ll take a great record to top ‘In Prism’ but then, this is Polvo we’re talking about. They only do great records.

Polvo play the Workman’s Club in Dublin on Friday October 29th as part of the Foggy Notions Harmonic Series. We’ve nabbed a last-minute pair of tickets to give away but you have to be quick – entries to [email protected] with POLVOTICKETSPLEASE as the subject by 10am Friday 29th! Don’t forget to include your thumped.com username & your real name. 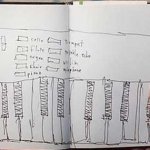