Loney, Dear – I Have To Start Believing This Is What I Do

“…the smiles and the joy in my music are not all true, and I’m moving closer to what I need to do.” – Siobhán Kane talks to Emil Svanängen of Loney, Dear.

Emil Svanängen has been making music as Loney, Dear for almost ten years. He released a number of records himself before coming to the attention of Sub Pop, who re-released Loney, Noir in 2007. Since then has released Dear John (2009) and Hall Music (2011), with the latter in particular as a lush, full, expanding of his pop-led sound, detailing vignettes of daily despair and drama in miniature. However, Hall Music retains the intimacy that is by now synonymous with his work, and that led Andrew Bird, unsurprisingly, to go out on tour with him a few years ago.

There is always a conflict present on Loney, Dear records, a naturalness that is awkward, as real life can be; evidenced in the heavyweight orchestration on Hall Music that vies with the rather frail fluttering of his heart. Although no two records of his are ever the same, (though they are often based in pop)they have sadness at their core, with a deeper rendering of melancholy evolving on Dear John around 2009; something you can sense from a song like “I Was Only Going Out“, where he sings, “I used to make you songs so easily,/ but things have turned so different from now“. Perhaps the truth is always to be found in the layers, just like the pea that causes the princess so much consternation in the Andersen story story – though several feather beds down, that pea can still be felt – it’s the same with Svanängen’s melancholy, he can cover it in feathers, but we can still feel it. Loney, Dear talks to Siobhán Kane.

When you started to record your music, did you play a lot of shows around Jönköping? Was it very frightening at first, and lonely?
It was in Stockholm basically. I played a lot in churches – I made some hymns I played that got quite popular. I guess they were honest, and people really connected to them. Yeah, there is a loneliness. I have often thought Loney, Dear is a silly name, but in the last few years have realised that it all makes sense. I am doing it all myself, but have started bringing people into the process much more.

How did your signing to Sub Pop in 2006 come about? What did you like about that label?
The fact that they are super cool and really can spread your music out there is great. It wasn’t for me though in the end – I got kicked out after that one great “pop” album Loney Noir, but I still feel really good about them, and had a really nice lunch with Tony K [Head of A& R] there last time I was in Seattle this spring.

Why do you think Loney, Noir was reissued by Sub Pop? Was it because they and you thought that was a good distillation of your ‘sound’? What is your relationship to that record now?
I love, love, love that album. I think it all made sense that they rereleased it. From a pop perspective it’s really great. Still, it’s not what I do now – the smiles and the joy in my music are not all true, and I’m moving closer to what I need to do.

How much do you feel Swedish culture affects your work? Is Dear John a reference to Lindgren’s film from the sixties?
Hmmm, I don’t know the Swedish title of that movie….I’m sure it affects me – I’m all for good shit and not for bad stuff. I suck up all I love.

You are a real perfectionist, do you think it remains difficult to feel that a record is somehow “complete”?
Yes, no,yes ,no. I don’t know [laughs]. I am working on that.

Around the time of Dear John I read that you were becoming more interested in the “dream state”and that hazy, just waking feeling, what is your relationship with that world now?
I guess that is a part still of where I want to go, but maybe not either dreamy or dark, more intriguing, or just plain good.

In some ways Dear John felt like a farewell of sorts to something, though I am not sure what.
Dear John was a bit of mistake, but Hall Music came after that. I hope that the next record will be the “dealbreaker”. I think I have been in the lowest lands and I am going into something bold now. This is gonna be great, all of it.

Hall Music is a beautiful record. How was your state of mind when you were recording it? You mentioned that some of your past records the “smiles” and “joy” were not all true, but Hall Music seems like you are trying to reach “a deeper understanding”, as Kate Bush might say – music appears to be your real conduit for difficult feelings that you cannot speak aloud.
You got it all there. Thank you. Use that as my answer please.

One painful aspect of that kind of honesty, is detailing struggle,but it can act like a kind of musical nurse, tending to wounds.
Yes! I think I know what you mean. I guess I need that myself. I don’t really know where it comes from, but I feel that way about it too.

You have this subtle way of writing loneliness, that deep fear in us that we rarely express but feel all the time. Who are some of your favourite songwriters that convey such meaning to you?
Thank you again, really. I have loved the Arvo Pärt music, partly because it is very simple yet deep. Your questions make sense to me, so much that I just feel like saying yes to you, all the time [laughs].

Maybe it’s because your music gets under the skin, it’s caught between a state of laughing and crying. I love that lyric from John Grant on his song ‘Queen of Denmark’, where he sings ‘cry, cry, cry until you know why’. Sometimes that can take a lifetime.
We all need to struggle. I’ve had some really rough times, life has been hard, but I hope I see a light turning now. Hold your thumbs. It might have gotten harder, we have gotten more choices. That is hard.

You are great friends with Andrea and Mariam from Wildbirds & Peacedrums, how would you describe the kinship?
They are the most loveable people. They are quite different, the two of them, a perfect match. Both Mariam and Andreas are often world class. Nothing less.

What are you listening to, and reading?
I am soaked up by the voice of Susanne Sundfor, and I am slowly reading Haruki Murakami, which for some reason reminds me a lot of Bulgakov.

When you were growing up, did it ever occur to you that you would be a musician? Sometimes I wonder about these parallel lives that we could live, or perhaps are already off somewhere, living.
I never thought I would do this, yet it is what I have been doing for seven or eight years. I have to start believing this is what I do, and then the possibilities are endless.

Loney, Dear plays The Grand Social on Wednesday May 9th with Gabriel & The Hounds. 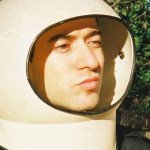 Next
We Come In Pieces – Night of the Living