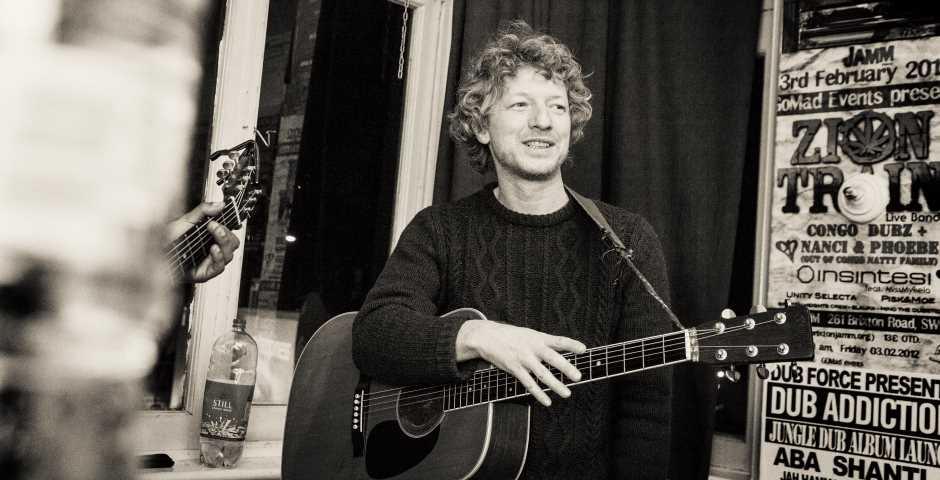 ‘The longer the journey continues the richer the past becomes‘ – Siobhán Kane talks to John Power of The La’s & Cast who will be playing an acoustic Irish tour later this month As part of The La’s and Cast, John Power has been a singular presence in music for almost three decades; his striking vocal radiating out of songs like Walkaway, Live the Dream, Guiding Star, and Magic Hour.

There is a circularity to his work; after not working with The La’s for several years, he returned for some shows with Lee Mavers in 2005, and after disbanding Cast around 2001, he began working on some shows and songs with the band around ten years later, releasing Troubled Times in 2012. His solo work has been just as interesting, and more folk-oriented; from Happening for Love in 2003, to Willow She Weeps in 2006, and Stormbreaker in 2008.

It’s hard to qualify what makes Power so special, perhaps it is his sincerity wrapped up in a Merseybeat minimalism, and a reaching out to something more mystical. It made perfect sense that he would go on to play John Lennon in Rob Eaton’s musical Lennon at the Royal Court in Liverpool last year, for which he gained great acclaim, because it honoured one of his influences, while showcasing his own musical abilities. He has always gone his own way, something which has inspired his recent tour with former La’s bandmate Jay Lewis, a series of intimate acoustic shows, as he tells Siobhán Kane

Your work with The La’s and Cast has provided a soundtrack to so many people’s lives, and pivotal moments in their lives, because the work manages to capture the melancholy and jubilation of living.
There are people who do come up to me and say that, you know. If you are a fan of the music it tends to mean a lot to you, we’re not like a household name, so if you are going to make an impression musically, it’s nice to know the impression is sincere to the people who like it, and not some sort of fickle fad that they got into for one summer. Substance is over quantity, and the fact that people dig it wholeheartedly is special, as that’s how music feels to me.

How are you finding these more intimate shows?
Once you start singing your songs and playing your guitar, whoever is there, we tend to connect, and these gigs have been fantastic – we’ve just done about eight in Britain, they have been pretty much sold out and packed, and that’s a good sign. My mate Jay Lewis and I have started doing these shows off the beaten track, and instead of it wearing thin, it’s getting better. It’s a real grassroots thing, it’s not a glamorous tour, you know, with big city venues. We are going to the towns that are caught between the big cities, they are very interesting, and a lot of people are really surprised we have been turning up in their town, and you get to meet them all and it makes you feel good inside.

You are reaching back into a rich folk tradition, as you often have on your solo records.
That’s true. When I left Cast the first time, I had a period where I couldn’t find my mojo and didn’t want to sing any of the Cast stuff, so I was doing more folk and rootsy stuff. On Willow Storm, I had gone off the radar, and I had to go back to my old roots and the fundamentals of why I was playing. When you are playing some crap bar on a Tuesday night and there’s you and a dog, you question why you are doing it, and you remember it’s not about the ego, you are doing it for yourself. So I went back to my own roots of why I was playing music, and from there we’ve been playing ever since, and musically the gigs have been going well.

I had to go back to that after the success of The La’s and Cast, as you can end up thinking that is what it is all about, and forget about the troubadour vibe, and the lonesomeness of it, and then the opposite as well, the joyous reason of why you are doing it, what makes a woman or man sing. Heartbreak and jubilation – a celebration of life and the wonder of it, and then the mourning of the passing of life, all of this is flying around you. And since then we have been going around, playing all of this stuff, and you know, I am getting older, and I feel strangely that I am playing and singing better than I ever have, and the music is more in the right groove than ever. All the ups and downs, and successes and failures fade into insignificance – it is in the very present where you exist, and if you can express that in the moment, then it tends to be invaluable.

That is what audiences are looking for I think – but it has always been that way, I often think people go to experience live music for a communal experience, something beyond the music.
I think so too. I think it is an age-old thing, it’s not a retro tradition but it has been part of us, and people like it, the craft of life, people like to sing, and connect, and even though we have all got our technology and constant barrage of shite TV, and mobile phones, and tweeting, and loud noises and neon lights, it all started by sitting around the fire and telling stories and singing songs, that primitive and original side of ourselves will always exist, falling in love, singing songs, watching a blue sky, watching an ocean rise and fall, these are the things that really move us, not the sugar hit of our fast lives.

I find the technology thing weird. I don’t watch TV. Cast have a twitter thing and facebook, and I now and again do a little post letting people know about our gigs, but it’s alien to me. The more I see all that, the more I feel how pathetic and worthless it is. I don’t want to put people down, but there are so many distractions to stop us connecting with ourselves firstly, we need to strive to discover who we are ourselves before we can feel good in our environment, and the way it is set up is deliberately to stop people finding their own selves, and a different frequency that they can oscillate to. It’s all about distraction and fear, people chasing their tails, and chasing things they think will make them feel good in life, bigger TV, another mortgage, a faster car, better clothes, glamorous this, 24 celebrity culture that, fast food, crappy food, and watching more TV.

Don’t get me wrong, I like a drink, and good conversation, but I do think that it takes more of a lifetime to see through the charade and facade of what it is. I don’t want to start preaching to people, but it is about individuals changing their environment and not the other way round where the external affects you, and your internal self, it should be coming out of you, and not being absorbed.

Is that what inspired you to starting working with Lee again around 2005? There was a real circularity to it.
That’s true. The La’s in 2005 was very important, as I was in a musical rut and sick of myself and what I had done, and when I rejoined with Lee for a year or two, it was like coming full circle and making peace with myself. Now I love The La’s and Cast, and am at peace with the journey, but before that I wouldn’t talk so freely about The La’s or Cast, but from that day on I started picking up the guitar again and wrote new solo stuff. Playing with Lee is always an inspiration whenever it comes around, it only seems like yesterday, but is 8 years ago. And you never know, I am open to one day us bumping into each other and getting it on, and maybe we won’t, but life is something that exists in the present. But there’s no ill will, I am very privileged with the people I have met, and Lee was a musical inspiration for me at a certain age and always will be, I loved my time in The Las’s, and it keeps me writing stuff – the journey meanders in and out, but from that day on, I rediscovered a bit of my mojo and I am always writing now – solo stuff, Cast stuff, you name it.

I think it proved to you as well that you are not afraid to go back if it feels right, you all have been on your own journeys – but there is something special at work in The La’s and Cast.
Oh God yeah, the longer the journey continues the richer the past becomes, and the present, and all those things add up to something now, but 20 years ago I was just a kid, and I didn’t know half the things I do now.

It feels quite poignant to talk to you 25 years on from Hillsborough. I know how much you have been involved in the justice campaign, and it must be very emotional to see how well Liverpool are doing in the League, and how finally the year long Hillsborough inquest is coming to pass.
I was in Dorchester playing the night before the match against Man City, and then had to play in Portsmouth, so I watched the match in a pub. Liverpool is on a such a run at the moment, you can’t believe it, it feels like something so wonderful is coming back to the club, with the team, and Brendan. The fans are rediscovering what the old Liverpool have been singing, and to think that this is the anniversary of Hillsborough is really something. The inquest is going to sort some things out, expose the lies and deceit, and it will hopefully give some sort of solace for the families.

With the League, it’s not over yet, we’ve got some games to go and I can’t emotionally tell you – honestly, there’s some sort of magic going on, I don’t know where it’s going to end, but as a football team something has been rediscovered and with the Hillsborough inquest it does seems poignant and it will be great for the families, it looks like they are going to pull everything out, which everyone knows, but there are certain people that say why don’t they get over what happened, but how can you, when there has been such lies and deceit and a cover up? You’ve had it yourself in Ireland in certain circumstances, that grief and anger burns deep in the families of the bereaved, and you can’t let things go until the truth and the light shines

There seems to be a hugely healing atmosphere falling on Liverpool at the moment, winning the League will mean far more than a trophy.
It will be very very much – nothing is going to bring back the loved ones for the families, but to have justice, and the truth to be told, will be some part of finally laying the memories to rest.