Of all the things you could accuse Neon Neon, you could never say they’ve approached an album in a half-assed manner. Super Furry Animal Gruff Rhys and hip hop producer Boom Bip’s first album, 2008’s Stainless Styles, was a faithful ode to the life of car mogul John DeLorean filtered through the medium of 1980s synth pop and hip hop.

If ever they were to be tempted into a second album, the subject matter would need to be just as evocative, and in Italian communist revolutionary Giangiacomo Feltrinelli they found a muse every bit as divisive and inspirational, and the result is Praxis Makes Perfect, a fascinating insight into the life of a left-wing revolutionary through the medium of electro-rock and Italopop.

Feltrinelli is perhaps best known for introducing the western world to Boris Pasternak’s novel Dr Zhivago, but arguably his greatest contribution to modern culture was his importation to Europe of Guerrilero Heroico, an image of Cuban revolutionary leader Che Guevara, which Irish artist Jim Fitzpatrick subsequently transformed into the iconic image we all know today.

Neon Neon’s producer half Boom Bip – real name Bryan Hollon – spoke to Thumped’s Dave Donnelly about the inspiration behind the new album and the future of one of electronic music’s most endlessly innovative projects.

Back when you released the first album, you seemed quite insistent it was a one-off project – what made you change your mind?
We weren’t sure because it was such a themed record around DeLorean’s life. We thought up the first album with the death of DeLorean and we thought ‘there’s no afterlife with John DeLorean so maybe there won’t be a second record.’ We really didn’t have any idea what we would do or if there would be a particular subject that fit along the lines of what we did with Stainless Style. That was a big factor in doing a second record. Another huge one is our geographical location – I’m in Los Angeles and Gruff is in Wales. Both of us do solo projects and have other bands that we do outside of Neon Neon, so it’s really a timing thing with Gruff and I. We had no idea if we were going to do a second one, and things just all came together. He sent me the book, Senior Service, by Giangiacomo Feltrinelli years ago, six or seven years ago, and we both really enjoyed it but at that time we didn’t necessarily that that would be a subject for the next album. I said it to him, if we ever take on another subject, maybe this is our guy. It was years down the road when we actually started working on it, and that’s because the timing came together and we both had a gap in our projects and decided to get together.

Would it be very much driven by Gruff or is it both of you taken your own elements from it?
Gruff got the book from an unusual friend of ours named Dr Kiko, who was actually Gruff’s pharmacist for a while, and he gave the book to Gruff probably ten years ago. Gruff bought the book and gave it to me, but Kiko was really the one who brought the idea on initially, and then Gruff came to me and said ‘this could really be a good subject for an album.’ That’s how it all came together. I was really inspired by the book as well, and just the idea of taking on such a bizarre subject and having all the different aspects of his life and thinking about how that could translate musically was really fun for me. That was the birth of the idea.

Could you explain for a moment just who Feltrinelli was and what about him it was that inspired you?
He was this Italian publisher who grew up with incredibly wealthy fascist parents, and early on he became a communist and started publishing really radical books. His story is insane. It wasn’t just political literature – although he mainly started off with communist literature and he was a card-carrying member of the Communist Party – but eventually he was wanted by the CIA and the KGB for publishing books like Dr Zhivago and dealing with Castro and Che Guevara. He went on the run and eventually died a violent death by allegedly accidentally blowing himself up with explosives he was trying to mount to a pylon just outside of Milan.

The book Senior Service was written by his son Carlo and that was our main inspiration for the album. There are a lot of insane stories in the book that we used. It is similar to the DeLorean story – we picked the highest and the lowest points of his life and focused on those, and put those into song. This time it was quite different from the first record in that we actually have a really strong source, and while Gruff and I were together in Wales writing the demos, we had this book as a reference for a particularly story from Giangiacomo’s life and Gruff would write some lyrics out and then I could match the tone musically. That was immensely helpful with this record as opposed to the last where we were grabbing onto different stories we heard from different sources. It was all over the place, whereas this is much more cohesive with much better references for the songs and music.

It’s a neat contrast between the albums, going from a car mogul and symbol of American capitalism to an Italian militant communist.
It worked because we had much more focus and we had better focus. We went and met with Carlo Feltrinelli and were able to go to the Feltrinelli foundation and look at all of these books that he spent his life putting out, publishing and collecting. We were able to hold the original manuscript of Dr Zhivago, and see these handwritten notes between Engels and Marx from the Communist Manifesto, and so we really had a direct source with this record which really helped make it more cohesive. With the DeLorean story it was drawing from a lot of different iconic symbols – the car is a very iconic symbol which everyone knows – and so we were drawing from pop cultural references with Stainless Style, whereas this record is really focused.

Did that tie in with the music as well? Stainless Style had a lot of ‘80s pop references in there, whereas this one you seem to have brought in a few Italian Eurodisco elements. Was that intentional?
That was definitely intentional. With the first record, we did touch upon the ‘80s sound, but we were trying to touch on the spectrum of DeLorean’s influence and his life, and at the same time the importance at that time where ‘80s pop was basically popping and in fashion again at that time. That was definitely the reason for the more hip hop aspects of the first record. With this one, we knew Neon Neon had an established sound with the first record and we didn’t want to part too far from that. We didn’t want to do something that was also in the era of Feltrinelli that was too themed or too derivative of that era. We decided to tell the story of Feltrinelli in a more removed way. We were able to pump a bit of the Italian ‘80s pop vibe into the record, so there were times when it felt very obviously Italian but still obviously Neon Neon. Gruff and I after we finished this record, we really felt it sounded like our idea of Neon Neon.

One of the achievements of the album, I think, is that you don’t really have to know who Feltrinelli was to appreciate the album – were you very conscious of not making it too heavy a record?
I think with Gruff’s lyrics, he was really careful that all the songs stand on their own, and they aren’t too themed around the story or are too earnest versions of Feltrinelli’s stories – they work as pop tunes on their own. That’s a strength that Gruff really has with his songwriting, but when you throw them all together they tell the story of the man’s life.

And obviously, you don’t have the same pop culture references – everybody knows the image of the DeLorean…
With the first record you had that iconic image of the DeLorean. People probably aren’t aware of Feltrinelli’s influence, but they’ve definitely seen it. He’s known for putting out that iconic image of Che Guevara that you see everywhere – he was the one who purchased that image from the photographer, who didn’t want to use it. Feltrinelli put that out and that became an iconic symbol. Obviously the books he put out, Dr Zhivago. People know the name Feltrinelli in Italy, and I think people outside of Italy have seen things he has been responsible for. His influence is there on culture, but people don’t necessarily see it. That’s the great thing about having the National Theatre of Wales show, to be able to tell the story and pad things out and to really drive the story home.

Can you describe what the stage show will be like now?
We collaborated with the National Theatre of Wales – Tim Price is the playwright and Wils Wilson is the director – and a year ago when we visited the Feltrinelli Foundation, Tim Price came along with us, and that was when we were doing the demos. So it all really grew at the same time, from that particular trip is where a lot of the influence was drawn, and from there we went and recorded the music and Tim began work on the live show. And so the live show evolved into a very interactive experience for the audience and they really become part of the show. They go through each song on the album and have video and actors and props to really the story. I don’t want to say too much – I’d like to leave some element of surprise.

Are you planning to tour the show now?
It’s a difficult show to take on the road. The stage and the props were built just for the show, and we were fortunate enough to do a run of shows in Cardiff, and the whole show will happen in London, and from there we’ll be doing various versions of the show at festivals and different venues. But as far as I know, the show is difficult so we’ll have London, Cardiff and maybe a couple of other places will be able to have the entire production. It’s been quite an experience. We spent a month working on the production and doing the rehearsals in Wales, and we’re excited about doing it in London. 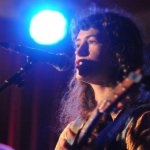 Previous
This Is The Kit, Twin-Headed Wolf, Mossy Nolan – Whelans May 29th 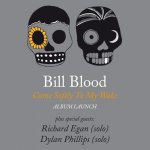