Drainland – Create Something That Confronts

Dave Donnelly spoke with Jamie Grimes of Drainland ahead of the launch of their split 7″ with Crows.
Given that they took their name from a solo album of Swans legend Michael Gira, it’s no surprise that there’s a little more to Dublin four-piece Drainland than your average punk band. In fact, Drainland are arguably the most prestigious and innovative hardcore group currently on the go in Ireland, mixing styles from fast and brutal hardcore to swampy, Neurosis-style doom metal with lyrics that address mental health and body image issues. Iconic US label Southern Lord underlined their exalted status by re-issuing the band’s 2010 LP …And So Our Troubles Began worldwide on CD last summer.

“We all have very different tastes,” frontman Jamie Grimes explains, “but early Swans and Sonic Youth, Neurosis, Voivod, Despise You and Whitehouse were all bands we decided to ‘borrow’ from when we started. In the greater scheme of things what influences us is a need to try and create something that confronts the things we find ugly and frightening about human nature as a means to try and understand it, expel it from our lives and move the fuck on. That influences everything we do in terms of lyrics, artwork, and our approach to playing.”

Grimes operates Suburban Mayhem Records, and the band’s latest release on the label is a split 7″ single with RTE-baiting Dublin hardcore act Crows. “It’s a teeny, tiny affair,” he says. “You could barely call it a label – it’s pretty much just a very expensive hobby and I don’t think we’ve so much as broken even on a record yet. Ireland has way too small a number of people who buy hardcore records to make it in any way financially stable.”

Drainland’s contribution to the split is two neatly contrasting tracks: ‘Solar Temple,’ a short, sharp burst of lung-bursting hardcore, and ‘Blood Procession,’ a morose, spacious heavy metal number. “The contrast is not as deliberate as it might appear. They were the two songs that fit best together of a couple I was working on, and because of the time constraints you have on a 7″, they conveniently lent themselves perfectly to one side.”

Grimes cites the cheery topic of death cults as his lyrical inspiration on the split: “’Solar Temple’ is about the Order of The Solar Temple, several members of whom died in suspicious circumstances. ’Blood Procession’ is basically a condemned man marching to his execution and being completely unrepentant about it. It was partially inspired by reading about the Hand of Death cult that Henry Lee Lucas claims inspired his murders.”

With the band due to record their second album later this year, it’s tempting to look upon the new songs as a glimpse into what to expect from the LP, but Grimes warns against reading too much into it. “The tracks were written specifically for the split, though bits of “Blood Procession” had been floating around for years in another song we’d discarded. The songs have a specific theme and mood, but the upcoming record will have its own specific theme and mood. Obviously, it’s the same band so certain elements might carry over.”

The Dublin launch for the split was originally scheduled for the Lower Deck in Portobello before being switched to Thomas House after the former venue converted to a pool hall. Grimes doesn’t mourn the venue change or the loss of a mainstay of heavy music gigs: “I don’t care. We won’t be playing live much anymore and there were always other venues besides the Deck. I don’t think it’ll have any impact at all to be honest. There are too many gigs as it is in my book – a bit of a cull of touring bands might be no bad thing.”

Next up for Drainland is a split with English powerviolence act Witch Cult: “We had a song left over from an earlier recording we wanted to use, and we recorded a noise track (something we’ve been meaning to do more of and not had time to) to go with it. It was kind of done at the last minute as they were looking to do a split for a tour they’ve just started. There’s a tape version floating around at the moment. The vinyl version won’t be much longer.

“There are various other projects lined up but work on them is at way too early a stage to go into anything too specific. The new LP and split 7” with Column of Heaven are the most immediate and important of those right now, and work is underway on music for both. We’re definitely not doing as many splits from now on.”

The Drainland/Crows split 7″ single will be available on the bands’ forthcoming launch gigs, as well as from the Suburban Mayhem Records online store. 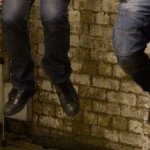