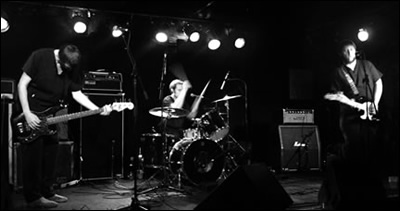 Picking the studio was the easy part. The three of us sat around after practice one day entertaining all sorts of fanciful ways that we might like to record our album, ranging from going to California to record with the legendary (to me) Mark Trombino, to heading to the Black Box in the south of France. All the while we were debating, a record by Songs:Ohia was playing on the stereo. It sounded great so we decided to investigate where it was done. Chem19, Scotland. Easy.

I think within a week of deciding we wanted to do the LP we had the studio booked with about 6 weeks to prepare (in my initial conversation with Pat, the studio manager, he asked what we wanted to do. When I replied a 14 song LP in 4 days he broke his heart laughing). This, for me, was the hardest and most important part of the whole experience. The previous Corpo recordings had enjoyed the luxury of being recorded at home, and we got to indulge with extra parts and overdubs to our hearts content. I think the first single may have had up to 20 vocal parts alone. The idea of recording 14 or so of our songs in just 4 days was extremely daunting, so it necessitated a hell of a lot of forethought.

What we ended up going to Glasgow with was pretty much a spreadsheet detailing exactly what instrumentation and overdubs each song would have. It was an exhausting task, but in hindsight, if it hadn't been done, we would not have come home with a releasable record. So what was Chem19 like? Initially we were shocked when we drove into this little filthy industrial estate in the middle of nowhere, but once inside we couldn't have been more pleased. The studio is basically an old lock up that's been converted into a medium sized live room with a vocal booth in the corner.

May 31st: 10 hours. Set everything up and recorded almost everything live, including double tracking guitars. Go home pleased with progress.

June 2nd: Day off and gig in Glasgow.

June 3rd: 17 hours. This is where things become a blur. We arrived in the studio knowing we only had 2 days left to do all the vocals, overdubs and mixing, so started flying through things at a ferocious pace, and we hadn't even begun recording 'Quick', the most elaborate song on the record. Finished very late, but this time extremely pleased with progress.

June 4th: Last day. We'd mixed a couple of songs the night before so had a listen back to make sure they were ok. Get stuck into mixing the rest.

About halfway through the day Alan from the Delgados arrives to play his cello part on 'Quick'. We stupidly let our eyes slip from the clock whilst working on this, and when we were done, some hours later, Andy looked at his watch and his face dropped. To his credit we stayed in the studio till 5am and managed to get the damned thing finished. We were on our plane home at 8am.

The whole experience, despite how overly intense it was, was an absolute joy, and the studio and Andy were perfect. He's a fantastic engineer and should have been given a production credit. I couldn't recommend Chem19 enough, and at £25 an hour, it was a bargain for the results we got. I can't wait to go back. Now we just had to deal with mastering the bugger…