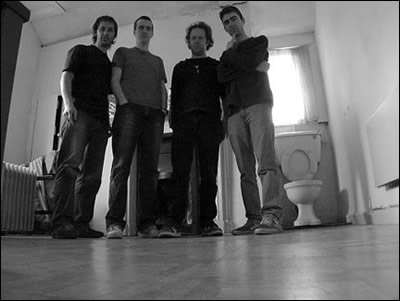 A free gaff for two weeks was the only reason we decided to do an album.
We thought we'd have the whole thing done within those 14 days.

We are luckier than most bands in that we had an unsurrounded cottage and a digital 8 track. Like most other bands we all have to work too, so two weeks immediately gets cut to two weekends and some nights, so much for that.

Most recording begins with getting a loan of Steve fanagan's microphones! We had already decided that we we're going to get the drums down first and overdub everything else. We had no choice really because we don't have enough equipment to record live. We did have the almost perfect set up though. Every room in the house was used. Drums set up in the office, guitar amp in the bedroom, bass amp in the sitting room and desks in the kitchen which connects all the rooms.

Our main concern was recording the drums, we recorded them onto two tracks on the Roland VS880EX. We used Mark's Tascam 8 track as a mixer for the 4 best mics we had placed on the kit. We did not have the proper mics for anything so getting the sound was trial and error and experience I'd picked up from having recently recorded the Connectfour Orchestra. Tip: get long mic leads. Some leads were long enough, some used crappy extentions and one was extended by putting a spare guitar pedal between two leads. Then we had to get headphones back to James who was about 15 ft away from the desk. Tip: when you put two extension leads together only one ear works!

Any old leftover mics were hung over the guitar and bass amp and we scraped the bottom of the microphone barrell and used what was practically a toy selopaped to the broom for vocals. Everything went into the desk and we recorded onto five tracks. Six Cans for a Fiver was busy moving house and playing gigs with Joan Of Arse so he wasn't there for the drum recording, probably just as well becouse we had run out of equipment!

We spent two days and one night with that set up and recorded 11 songs.
We we're not paying studio time and not employing an engineer so we kept recording takes untill we were happy. Most of the time was spent getting the songs faster and faster. We listened back to everything through a small pair of powered speakers. It's very difficult to know when the drum mix is right when you're recording them onto two tracks like that.
Pretty damn impossible actually. Our big mistake was not recording the 4 drum tracks seperately onto Marks 8 track. oh well.

In the absence of a bass amp and old style 50w guitar amp is great for bass. It sounded brilliant, it was just a matter of recoding that sound.
We tried every mic we had, in front, behind, far away, close up. A Sure 58beta (should have known anyway, it's our best mic and the only proper mic we used from now on.) placed about 8" from the speaker played pretty loud was best and Mark did all his bass parts in a few hours. Brilliant.

The next few evenings were spent doing my guitars. With a Strat, a Tele and a Gibson The Paul gathered around Mark and I has a lot of fun with guitar sounds. Most of the time we had the Marshall JCM 900 horsed up.
Again we tried lots of mikes and again the Sure 58beta won out. Again the problems of not recording together; for example I recorded two tracks of guitar one night with Mark's Gibson on the song Omener. It sounded immence. This was the thickest most gruesome guitar sound around but once the vocals and the other guitar was on top it died and jst sounded like mud. It was redone. Actually quite a bit of what we did at this time was redone in the last few days before mixing months later.
That's the benifit of working from home and being able to keep reviewing and touching up.

We spent more nights the next week doing vocals. We took our time at working out harmonies and finishing words. We used a high ceilinged room for a natural reverb. Ok, here's the best tip, get a really good microphone. With the exception of the telephone the 58beta was the only one we used from now on and we hadn't even done Six Can's guitars yet!

A few days later we started the other guitars. Pretty simple really.
Half the songs done, it would be about four months later before we could get the rest finished. In the meantime we rough mixed the finished songs to minidisc. I recorded and finished the Goodtime John album (learning a thing or two in the process) and Joan Of Arse released their album. I had been fixing vocal lines here and there and even totally re-recorded some guitars. I discovered a way of fixing the drum tracks, we since discovered the drum mix was a bit off. We got Ian out to sing his part and we put together the noise section.

Eventually we were able to complete Six Cans guitars and it was like everything came together. I tried a new mic position I had noticed the sound engineer use when we played with 46 Long a while before and that was it. Seems obvious now but instead of micing a speaker place the mic equally between them both and quite close to the cab. Six Cans' axe never sounded so chunky and fat (it helped that he forgot his Telecaster this time!).

Now I don't think it's necessary to have everybody present for the mixing. You just need a decent stereo that you can turn up loud and a rented DAT machine. We mixed all day, some songs a god few times. The mixes got quite complicated often requiring four hands (we still haven't bothered to learn the auto mix section of the desk). Brilliant, finally finished. Except nobody liked the mix. I fixed a date for a remix, rented the DAT machine sat down and remixed it in about four hours.

We then chased Fergal Davis for a month or more to get it mastered. That finally happened on the 22nd December. We began in June!

In the meantime we had decided to put our video on the CD. It couldn't be that hard could it? I'll spare the frustrating details and let you skip over to the article, "How to put a video on your album… it may not be perfect but it works" 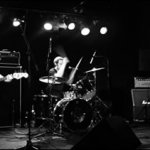