We’ve a couple of tickets up for grabs for Molly Nilsson‘s gig in Whelan’s on May 4th thanks to our pals down at whelanslive.com

Molly Nilsson has been running her own label and producing her own music since 2007, releasing 3 albums, several eps and producing evocative videos that elaborate on the themes she is obsessed by. ‘History’ is her fourth long player and follows a busy year of touring, writing and surprises. Originally from Sweden, Molly moved to Berlin and set up Dark Skies Associations to explore her fascination with pop music, both her own and that of her peers.

The music released under own moniker is a heartfelt rendering of romanticized pop music, gloriously DIY in method and honest in practice. Clearly influenced by the minimal synthesizer pop of the likes of Ultravox and early Depeche Mode but also adept at timeless melancholic song writing, each song presents a compact sound world which twinkles with a sense of loneliness and the warmth of its opposite.

To be in with a chance of winning a pair of tickets just send an email to [email protected] with MOLLYNILSSONTICKETSPLEASE as the subject line by midnight on May 1st.

Previous
The Cast Of Cheers – Animals 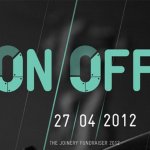 Next
Legion Of Two, Patrick Kelleher, The #1s – On / Off Fundraiser For The Joinery