Mark Kozelek, the songwriter behind Red House Painters and Sun Kil Moon, plays The Button Factory on Wednesday and we’ve a couple of pairs of tickets to give away.

US singer-songwriter Mark Kozelek will play songs from his 20 year catalogue at an intimate seated show. Kozelek’s unique solo compositions, and beautifully unrecognisible cover versions of songs by other artists have seen his music feature in numerous TV shows and films over the years.

Among The Leaves is the 5th full length album by Mark Kozelek under the Sun Kil Moon moniker. Played almost entirely on nylon string guitar, this 17-song all original album was recorded between October 2011 and January 2012 in San Francisco. Among The Leaves – words which caught Mark’s attention from a John Connolly novel – finds Mark relaxed, singing playfully about his life as a musician while retaining the melancholic spirit of his 20 year catalog.

Mark’s love for San Francisco and Northern California are at the heart of this new album. Though Among The Leaves is mostly in the solo, nylon string style of Admiral Fell Promises, a new ensemble of players joined Mark for a portion of the record, recalling the same spirit as April and Tiny Cities, but with a fresh, new sound.

To be in with a chance of winning a pair of tickets just send an email to [email protected] with MARKKOZELEKTICKETSPLEASE as its subject by midnight on Tuesday 6th November.
POD Presents
Mark Kozelek
The Button Factory
7:30pm, Wednesday 9th November
Tickets €15 incl. booking fee from Ticketmaster.
Previous
Dogs – East 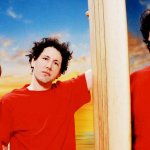