Finland’s K-X-P play Whelan’s with Twinkranes on Thursday 25th April and we’ve a couple of tickets for you to win.

K-X-P
Finland’s finest are back with something truly epic. Where K-X-P’s 2010 debut was an exercise in Kraut-tronica, K-X-P II finds the band unleashing their inner pop deviance. This is an album full of rock ‘n’ roll shamanism, glam-punk madness, grinding dance music, electronic Motörhead techno – and a bit of Krautrock too.

K-X-P comprises frontman Timo Kaukolampi (electronics, vocals and the ‘K’ in the band’s name) plus Tuomo Puranen (bass, keyboards and the ‘P’ in the band’s name) and drummers Tomi Leppänen and Anssi Nykänen (the ‘X’ – for the mystery). While Tomi is a permanent feature of the band and 2 drummer line-up is a studio only affair- it has been known to happen live on rare occasions. Born from the ashes of seminal Finnish groups Op:l Bastards and And The Lefthanded. the band began with a manifesto: “K-X-P started after I wanted to stop playing in bands,” says Timo, frontman. “It’s the antidote to normal bands. Its an anti-band”

Twinkranes
Dublin’s Twinkranes create psychedelic progressive pop skillfully harassing drone and the motorik beats of Krautrock to create a hypnotic & visceral live show and a brief but noticeable rip in the space-time continuum.

If you fancy winning a pair of tickets just send an email with KXPTICKETSPLEASE as its subject to [email protected] by midnight on Tuesday, April 23rd. 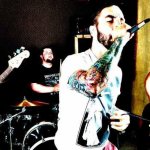 Next
Call Of The Void – Dragged Down A Dead End Path