Are these actual recruits or just a bunch of gym headers looking to challenge themselves?? (1 Viewer)

Are these actual recruits or just a bunch of gym headers looking to challenge themselves?? 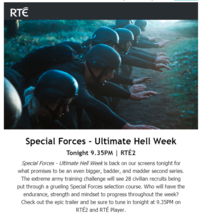 Sort by date Sort by votes

That show is so LOL, the way the sergeants all try to act tough and shit. You'd be pure Private Piles laughing at them and there'd be fuck all they could do about it except send you home.
Upvote 0 Downvote

Cormcolash said:
That show is so LOL, the way the sergeants all try to act tough and shit. You'd be pure Private Piles laughing at them and there'd be fuck all they could do about it except send you home.
Click to expand...

I work with a guy here, ex-Marine

Yeah, like if you were on the show you'd be like "When are we going to war lads? Oh wait this is the Irish army, I forgot we're just here for a laugh really"
Upvote 0 Downvote

7 - No tomorrow said:
I work with a guy here, ex-Marine

So I guess this SPecial Forces is just like these Boot Camps you see in Fairview Park
And we don't have that kind of thing for reals
Click to expand...

I think it was the BBC made a version of that show as well, were the trainees went through 5 different special forces trainers in a week, from all different countries. There was a South Korean special forces trainer on it who was an absolute joke, if you were on the show you'd just walk off and when they asked you why you'd be like "Because you're putting clowns like this in charge" haha.
It was brilliant how noticeable it was too, because of the contrast with the other special forces ones they had on. Like you wouldn't mess with the South African lads for a second, they actually looked like they'd just batter you.
Upvote 0 Downvote

The French ones on that show seemed pretty tough alright.
I think one of the things that's so funny about the Irish version is that the sergeants are always going "Fucking this and fucking that" as if saying fuck is meant to make you scared of them, haha. Instead you'd be there like "If you lads were actually anything to worry about, you wouldn't even need to be shouting."
Upvote 0 Downvote

Where do they get the fuckin bozos for this show like.
"Well, I'm kind of afraid of heights, and water terrifies me, so I thought I'd apply for this thing that absolutely guarantees both of those getting thrown in my face"
Upvote 0 Downvote

I dunno, I know a lad in the Irish defence forces, he spent a fair amount of time off on various "peacekeeping" missions that he'd rather not get into. I mean, I get the impression he wasn't gunning down innocents as much as other armies but he's certainly seen and done shit that no one should.
Upvote 0 Downvote

The foreign legion guys that I've interacted with have had a definite reason for being FFL. And by reason I mean criminal record, and clear mental health problems.

No judgment on criminal records, I'd imagine a lot of Irish people would have one if American rules were applied. Nor mental health problems. Glass houses and all that.

But the legion guys I've interacted with were a different lot. I've met zero legion guys that finished, toured, and got out successfully. None. I've met one who got worried about a specific tattoo that was looking at him one night, resulting in him having to cut that tattoo out of himself. That night. The butchery. I remember up to the point that he showed me the result of his handy word, from that point on is blank.

There was a few former legion lads couriering motorbikes around Dublin 20 odd years ago. The Foreign legion was crazy because that was where you ended up if you fell out of society. But then there were lads who fell out of the Legion. I imagined them getting chased down, but that's not the case. They fall out of the Legion, and end up on Honda NT650s delivering letters for lawyers.
Upvote 0 Downvote

Dälek - With These Mics (Exile On Mainstream)