Entry includes free copy of The Blizzard (RRP €14.99) for all & free pint of Becks Vier for first 100 through the door on the night. Tickets from: www.theblizzard.eventbrite.com

The Blizzard (@blzzrd, www.theblizzard.co.uk) is a quarterly football publication - part book, part magazine - providing a platform for top-class writers from across the globe to write about the football stories that matter to them. Previous Blizzard events have occurred in London, Sunderland, Leeds, Swansea and Liverpool and we’re delighted to now have them make the trip across the Irish Sea. Join us this evening for a rousing Q&A of two halves with audience participation, visual footage, social media interaction & competitions to discuss the in-depth, topical & humorous football questions of import All ticket-purchasers will receive a free copy of The Blizzard and the first 100 on the night will receive a free pint of Becks Vier.

Jonathan Wilson (@jonawils) is founder & editor of The Blizzard. A sports journalist and renowned author who writes for a number of publications, including the Guardian, the Independent, the Daily Telegraph, FourFourTwo & Sports Illustrated. Wilson was football correspondent for the Financial Times from 2002 to 2006 and is a columnist for World Soccer, The Irish Examiner and bettingexpert amongst others whilst also being a regular participant on The Guardian football podcast, "Football Weekly". He is a Sunderland A.F.C. supporter.

Philippe Auclair (@PhilippeAuclair) is a football writer, biographer and broadcaster (and musician when none of the above). Philippe is a regular contributor to The Blizzard and Champions magazine, has held the position of England correspondent for France Football magazine since 1999 and fulfils a similar role for news and sports radio RMC Info. He appeared as French football analyst on Setanta Sports News channel in England, and can be heard regularly on TalkSPORT radio in England, Newstalk radio in Ireland, the BBC and is also a regular contributor to The Guardian’s Football Weekly podcast.

Miguel Delaney (@MiguelDelaney) is a London-based Irish football journalist & author. A regular contributor for ESPN, The Irish Examiner, The Independent & The Blizzard, he is also the author of 'Stuttgart to Saipan' and was a 2011 nominee for the Irish Sports Journalist of the Year award. His articles for The Blizzard include "Wenger, l'Auteur" - What Francis Ford Coppola, Michael Cimino and the Hollywood of the seventies tell us about Arsenal.

Eoin McDevitt (@EoinMcDevitt) is broadcaster & presenter with Second Captains (@SecondCaptains) now both a television programme on RTE as well as a bi-weekly podcast featured on The Irish Times. 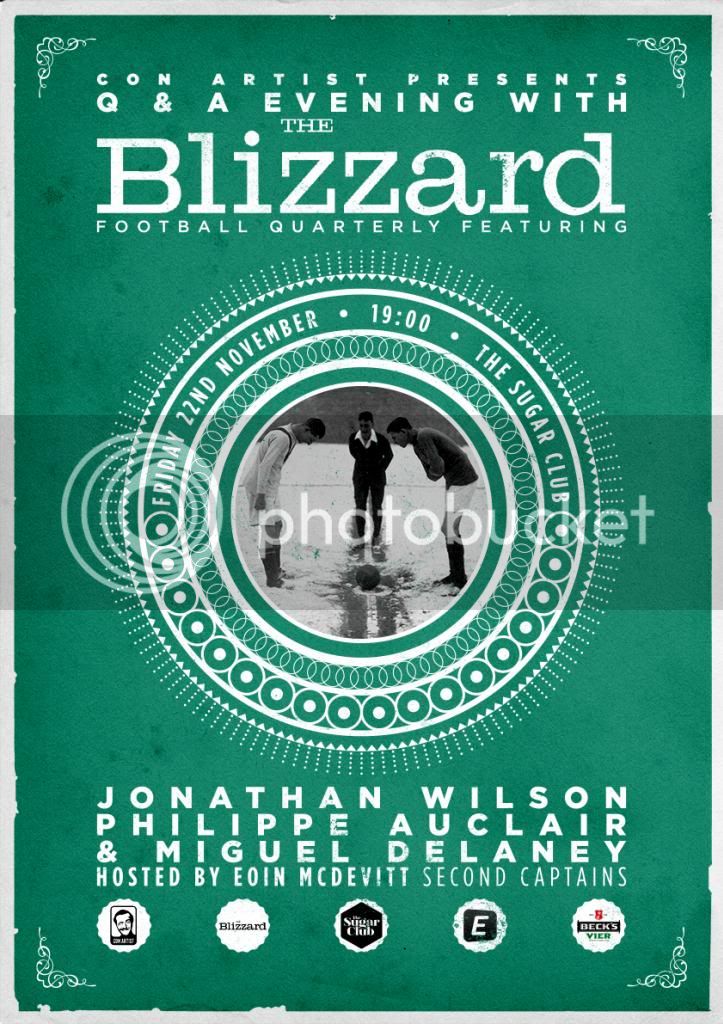 the Blizzard is great

oh shit said:
the Blizzard is great
Click to expand...

Tis, but I'm annoyed with myself for falling an issue behind.

There was a great piece in it on Japanese fan culture I really liked.

This should be interesting. For one thing it'll clear up the question of who's geekier: football geeks, movie geeks, music geeks, or some other sort of geek.

It could well be football geek.

CinnamonBoy said:
This should be interesting. For one thing it'll clear up the question of who's geekier: football geeks, movie geeks, music geeks, or some other sort of geek.

It could well be football geek.
Click to expand...

I'm already crafting a question about football governance for the Q&A.

Gutted that this is a 7PM start, new job with weird working hours means I won't be able to make it.

Unicron said:
I'm already crafting a question about football governance for the Q&A.
Click to expand...

I've a question for Jonathan Wilson relating to the Kispest Honved side of the '50s formulating in my head.

CinnamonBoy said:
I've a question for Jonathan Wilson relating to the Kispest Honved side of the '50s formulating in my head.
Click to expand...

I have a terribly uncharitable image in my head of the person who will ask the LOI question at this.

Blizzard Q&A one of the highlighted events of the month in Totally Dublin. Remember - a free copy of Issue 10 of The Blizzard for every ticket-holder & free pint Becks for the first 100 through the door. Last few tickets available online at www.theblizzard.eventbrite.com. 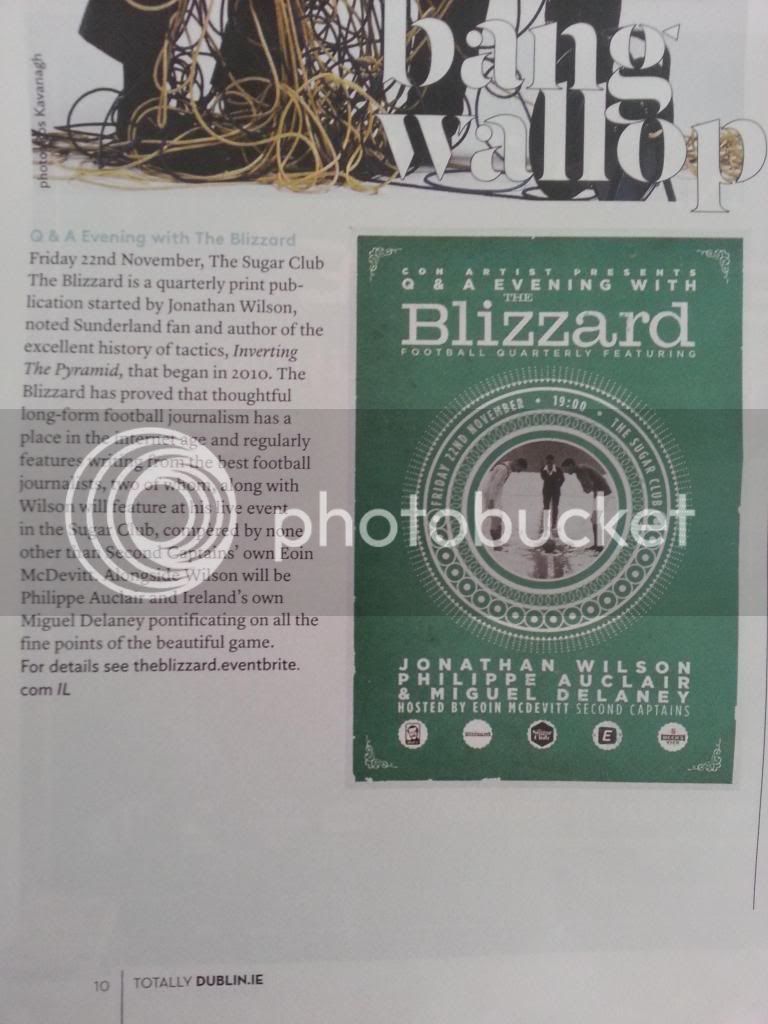 Went last night, very much enjoyed it. Wilson is a fine storyteller.

I liked the fact that they probably sensed that conversation on O'Neill and Keane was exhausted after 3 incessant weeks and they didn't devote much time to it.