Subplots are Phil Boughton and Daryl Chaney. ‘Colourbars’ marks the first new release by the band in over 5 years. A marked departure from their debut album ‘Nightcycles’, the track is the first taste of their forthcoming second album, due later this year on their own Cableattack!! Records imprint.

The track is available for free download at the band’s Bandcamp page (http://www.subplots.bandcamp.com). 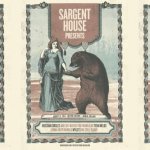