Have a listen to the debut release from secretive trio Michael

All we know about Michael is that they are independent artists from Clare, Wicklow and Sligo who’ve been involved with “various projects” you might have heard of, and that The Burns is the first release from Shudder, an LP coming in 2020.

The video for The Burns deals with “the tensions inherent in living according to the mythical identity of the lone hero, and how our want to keep the myth alive is leading to the destruction of ourselves and our planet“

MICHAEL is a group of independent Irish artists hailing from counties Clare, Wicklow and Sligo.

Their music focuses on the way we fluidly and continuously construct and reconstruct our personal and interpersonal identities by borrowing from what’s available in our immediate environments, and the inevitable conflicts such processes entail.

Questions of identity being the core theme of their lyrics – their MC doing a PhD in philosophy dedicated to the topic – they have chosen, after much thought, to conceal their own.

In an effort to reveal themselves in their art, in a time of instant celebrity and ubiquitous commodification, concealing their identities allows them give as much of themselves as possible without the need to maintain or defend identities constructed for them by others.

Borrowing sounds from hip-hop and electronica, borrowing aesthetics and attitudes from post-punk and experimental hip-hop, borrowing experiences and ideas from all over the world; borrowing personas, voices, and ambitions, MICHAEL’s project is to bring about a subtle unsettling by inviting listeners into a space of artful awkwardness, holding them there long enough to change their relationships to stability, and hopefully, long enough to stabilise their relationships to change.

The Burns was recorded in Berlin over a long weekend in late 2018 and the video, shot in a single day in Wicklow, was directed and produced by Ror Conaty.

Next
Thea 2: The Shattering 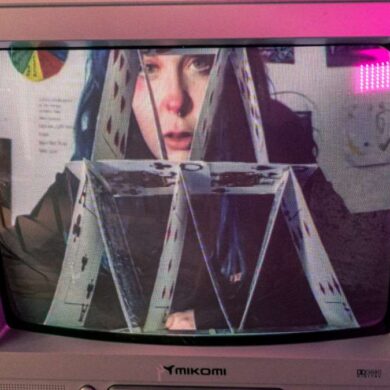