Three From The Richter Collective

The Richter Collective have a busy month ahead – three new releases all coming out over the next 4 weeks.

The Richter Collective have a busy month ahead, with new releases from Jogging, The Continuous Battle Of Order and Worrier all coming out over the next 4 weeks.

The album is available to stream & buy now from http://worrier.bandcamp.com & also iTunes etc.

April 17th 2010
When influential Belfast based Math-Punk trio We are Knives disbanded last year it seemed like the end of an era, but quicker than the notice had gone up of the bands demise a new entity, known as The Continuous Battle of Order, had announced its arrival. The Continuous Battle of Order is the brainchild of Hornby and Craig who are no stranger to Independent music in Ireland having been in DIY Punk bands for over fifteen years and playing north and south of the border. Pttrn Skrs is a window into the insane, frantic and extremely urgent technical music world of The Continuous Battle of Order. The band have received rave reviews for their very infrequent and intense live shows and are slowly building up a fan base from the ground up.

They will be playing an album launch on the 17th April in the Twisted Pepper supported by Patrick Kelleher, Hands up Who Wants to Die & The Cast of Cheers. 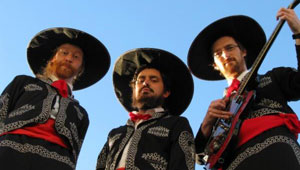 May 2nd 2010
Having played as side-men in a laundry list of Dublin indie luminaries (Jape, Jeff Martin, Goodtime John, Coldspoon Conspiracy, Cap Pas Cap, Guilty Optics, Crayonsmith) the 3 members of Jogging have finally stepped out in to the limelight in 2010. The band have steadily built up a fan base around Ireland in their short existence; very much at a grassroots level. Word of mouth from fans and kind words from webzines like Ragged Words and State Magazine have been spreading word of their exciting live shows which also lead to support slots with Parts & Labor, Crystal Antlers and Ponytail among others (including been chosen multiple times to play with The Redneck Manifesto & And So I Watch you from Afar) throughout the year. Musically, the band would not be out of place sitting among Dischord/Wahington luminaries like Fugazi, Faraquet and even early Q and Not U which is also helped by the stamp of approval by TJ Lipple (Medications, Aloha) who mastered this record in Washington, DC. Jogging are an intense, raw blend of Punk, Indie and Dance while maintaining a fresh, urgent and current edge. Their new record, entitled Minutes, was recorded in Kilcoole, Co. Wicklow by James Eager & Eoin Whitfield and Mastered in Washington DC by TJ Lipple.

Jogging will be playing an album launch on the 2nd May in Whelans supported by Not Squares & Logikparty with an afterparty upstairs.

Tickets for both the TCBOO & Jogging events are available through tickets.ie

Previous
Out On A Limb – New Website & Windings news