The Last Sound will launch their new album Rainbow Xplode on June 8th, when they’ll play The Twisted Pepper with Last Days Of 1984.

The Last Sound is Barry Murphy, with Bryan O’Connell.
With an electronic/psychedelic sound, The Last Sound made their live debut as a machines/live drums one-off two-piece at the legendary Lazybird night in Dublin. Ever since, a sizable and diverse catalogue of output has been building up including four albums, three EPs and a slew of compilation tracks, remixes, live mp3s etc. spread across various labels both in Ireland and abroad.
Outside of The Last Sound, Barry has performed a number of times on stage as part of ex-Can vocalist Damo Suzuki’s never ending tour band, also appearing on his 2009 live album One More Universe. He is also one half of elusive psyche-drone merchants Whirling Hall Of Knives, formed in 2006 with Trensmat/Nute founder Magnetize. They have appeared on The Wire magazine’s influential Wire Tapper compilation series.

The album can be preordered now from  http://osakarecordings.bandcamp.com/album/rainbow-xplode. 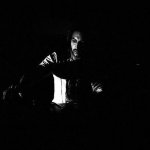