The Holy Sparks!!! – Across The Endless Seas

The Holy Sparks!!! will release their debut album ‘Across The Endless Seas‘ on May 9th, with a launch gig in Anseo on May 23rd

THE HOLY SPARKS!!!
The Holy Sparks!!! are a trio obsessed with historical villains, dark shadows and eternal truths. A wide variety of instruments and influences are mixed to produce their sound, and they have recently described as ”One of the most refined rock newcomers you will find in this emerald isle this year”.
Their debut album ‘across the endless seas….’ Is due for release on 9th may on Drunken Lust Records. Lovingly self-produced by the band themselves over the course of 2013, the album showcases their diverse sound; lyrically dealing with subjects as diverse as conceptions of the afterlife and submarine devouring sea-creatures. Ever with an eye on driving, catchy riffs and rhythms, and always tempering intensity with humour and experimentation the 10 track album delivers on the promise shown by their previous release (‘plots of the patriarchs’).
The Magpies:
The Magpies are Dublin based 4-piece who play music for the birds. The Magpies are Christopher Barry , David Blaney , Steven Brennan and Pierpaolo Vitale.
http://www.breakingtunes.com/themagpies

Admission is €5 with a free album and a badge.

Previous
The Holy Sparks!!! – The Fog 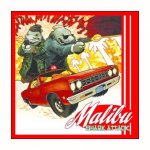 Next
Malibu Shark Attack – LP Out May 23rd