The band will play an instore gig in Tower Records at 1pm to celebrate the launch, followed by a rake of live gigs over the next couple of weeks.

The album, the follow up to 2010’s Hither Thither, was recorded and produced by the band in their own studio:

Vitreous was self-recorded and produced in the band’s very own studio (Big Skin HQ) in Cork. Big Skin was (literally) built from the ground up and everything from label administration to recording happens inside its grubby, fire-stained walls. The resulting recordings are a direct representation of this operation, being the band’s most potent and distinct work to date; a stamp moulded from their many meandering sessions there.
While debut Hither Thither could be described as a lush tapestry displaying a classical use of depth and shading, Vitreous presents the listener with a starker, polychrome and pixelated picture. Heavily distorted drums take their place alongside syrupy analogue synths and disgusting fuzz guitars sounding like bees buzzing inside tin cans. Beautiful landscapes are destroyed with disparate, abrasive sounds in perverse displays of artistic self-destruction. 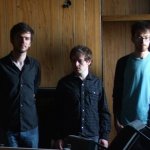