Hunter-Gatherer‘s new 7″ Pere Lachaise is out this week & we’ve got a pair of tickets to give away for the launch gig in Whelans with Mel Joann & Ilex.

Hunter-Gatherer‘s new 7″ Pere Lachaise is out this week & we’ve got a pair of tickets to give away for the launch gig in Whelans this Thursday with Mel Joann & Ilex.

Hunter Gatherer
The dark and mysterious Hunter-Gatherer, the masked electronic wunderkind and Witch House enthusiast, conjures up a haunting athmosphere of icy yet oddly uplifting melancholia that has found some secret kind of third place between home listening and the dance floor.

Following in a long tradition of Hibernian gothic, Hunter-Gatherer emerges into the light with a slab of vinyl holding two tracks of athmospheric gothtronica. The menancing ‘Pere Lechaise’ that slowly entwines itself around your inner ear and the more relentless ‘Undergrowth” that beats a spiritual path to your door.

Mel Joann
With a slew of sets for the likes of !kaboogie, Skinny Wolves and State Magazine, Meljoann has prepared the way for her new album ‘Squick’, which is due for release on Boy Scout Audio, on 29 October. Her sound has been described as ‘wonky R&B’ or ‘electro skweee funk’ (Nialler9). As part of the musique concrète/industrial noise combo Gland & Conduit (debut album ‘Ore’ due out this October on Second Square to None) she has played shows for the Dublin Electronic Arts Festival (DEAF), The Centrifuge, A4 Sounds, and Second Square to None.

01 So Academic by meljoann 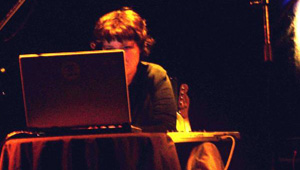 Ilex
Holly McGowan is an electronica producer based in Dublin under the monikers Fringe and Ilex. She has been composing since 2005 and has played in numerous venues in Dublin, Cork and Galway. She has a release on the Alphabet Set label, and has a forthcoming release with New York/Icelandic based label Hljóðaklettar. She is currently working on her debut album.

Good news! We’ve got a pair of tickets to give away for this gig! To enter (Do i have to go over this again? Really?) just email your thumped username & your real name to [email protected] with ‘Hunter Gatherer Tickets’ as the subject line. Entries in by midnight on Wednesday, please. The LUCKY WINNER will be notified first thing on Thursday morning.

“A nice smoke machine/projector show” has been promised. It doesn’t get much better than that.