On Tuesday March 27th two Cork based bands, Ten Past Seven and Los Langeros scaled the highest mountain in Ireland, Carrantouhil, in an effort to bring contemporary Irish music to new heights. Both bands performed a piece of music at the summit in front of an audience consisting of three bewildered English mountaineers and an onlooking mountain goat.

The idea was conceived as part of a plan to release a split single during the summer. Before recording together the bands felt that some fresh inspiration was needed and so decided to undertake the feat of climbing the highest mountain in Ireland.

Instrumentalists Ten Past Seven originally from Killarney and Cork based country punks Los Langeros met the challenge in glorious weather and high spirits, accompanied by local guide John Hussey and cameramen Colm Walsh. With electric and acoustic guitars, bodhran, banjo and a microphone in tow, the bands reached the peak and much to the amusement of the mountain goat, performed a song in their individual styles. Having descended the mountain intact, the bands then retired to a house on the beautifully rugged Bearra peninsula for a long weekend of recording.

The split single simply titled ‘Highest bands in Ireland’ will be released exclusively on vinyl in October and will feature a track from both bands. A nationwide tour will coincide with the launch of the single.

Tour dates confirmed so far are: 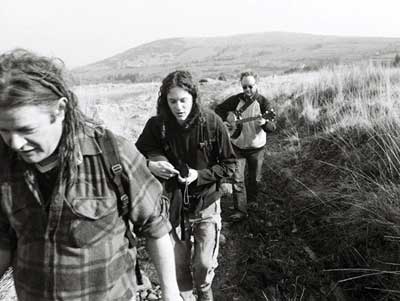 Next
The Return of The Dudley Corporation