Heathers: Here, Not There

Here, Not There, the first LP from acoustic duo Heathers is out on 23rd May on Hideaway Records.

Here, Not There, the first LP from acoustic duo Heathers is out on 23rd May on Hideaway Records, just before the sisters are due to sit their Leaving Cert and their subsequent month long US tour.

Heathers are twin sisters from Dublin. They are 18 and will sit their Leaving Certificate exams in June 2008. Despite obstacles of school and the fact that up until their birthday a few months ago they had to sneak into their own gigs, Heathers have exploded in popularity in the local scene. When seen live this is hardly surprising.

Armed with just one guitar and two incredible voices, the result would brighten the darkest room. The lyrics -at times abstract and poetic, at others more metaphorical storytelling,  are unified by their consistent quality, delivered with an impressive display of vocal range.

Heathers‘ debut album ‘Here, Not There‘ comes just one year after their first gig. A year where they have been in high demand at house parties and local gigs alike and are set to embark on a 30 day US tour with Ghost Mice (US) in July that will see them playing with artists such as Kimya Dawson (of The Moldy Peaches).

Here, Not There is released on 23rd May as a joint release between Hide Away Records (IE) and Plan-it-X (US)

The album launch takes place in Eamon Dorans on 23rd May. Hooray For Humans & Reuben Teskey are also playing, with admission a more than reasonable €10 including a copy of the album or €6 without. You’ll also be able to pick up a copy of the new Hooray For Humans 7" Already Sleeping, also released on Hide Away Records at the gig.

They’ve also lined up a free and all ages gig instore at Road Records for the 24th May. 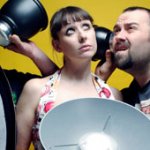 Next
Sea Dog: Wizards Of The Coast