Ninepoint Records have just released their first live album – a collaboration between E+S=B and Gavin Duffy recorded at The Joinery.

Ninepoint Records have just released their first live album – a collaboration between E+S=B and Gavin Duffy recorded at The Joinery.

On Saturday 20 September 2008, Gavin Duffy joined subterraneanavant-gardestalwarts Electronic Sensoria Band for their first live performance together. The result was "… an hour-long improvised expedition inspired by the non-alignment of free jazz, the metronomy of krautrock and the latitudes ofspaced-outpsychedelicjams."

The album is available now from www.9-pt.com, and each of the 50 copies contains a unique drawing by Fergus, Anthony or David from Electronic Sensoria Band.

ELECTRONIC SENSORIA BAND (E+S=B)
Electronic Sensoria Band arose in 2002 from improvising sessions between Fergus Cullen and members of the Wormholes and Memory Cells at Dublins legendary Lazybird club. Their backing of the renowned ex-Can vocalist Damo Suzuki at his debut Dublin show was recorded and became the first release on their Last of our Kind label. Since then they have scaled down to a three piece line-up consisting of Fergus on guitar and clarinet, with brothers David and Anthony Carroll on drums and bass respectively.

GAVIN DUFFY
Gavin Duffy has been playing music for the last decade in Dublin city and co-runs Ninepoint records. Since 2004 he has released several acclaimed records and toured internationally with groups Thread Pulls and Cap Pas Cap. More recently he has embarked on improvised live shows playing trumpet and percussion with Electronic Sensoria Band and Karl Him. 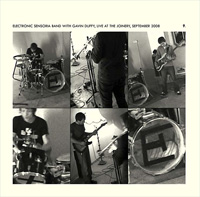