Daemien Frost‘s ‘Spirito Di Daemo’ CD & DVD is now available from the Learn To Love website, with real world distribution starting on May 1st. Along with 4 new songs you also get a Daemien Frost documentary, 5 music videos and a remastered version of Corpus Damo, their first album.

Following the addition of a second bass player, a 3-week tour of Europe in Spring 2003, the recording of a new EP, appearances at 2005’s Indie Rocket (Pescara, IT) and Hot Viruz (Ancona, IT) festivals AND the ultimate yet not-so-timely demise of Daemien Frost itself, Learn To Love & Red F Records release Daemien Frost’s posthumous "Spirito Di Daemo" CD + DVD in May 2008. The release features a CD containing 4 new recordings and their seminal  1st CD, "Corpus Daemo", re-mastered. The DVD contains a 30 minute documentary on Daemien Frost, 3 live-action and 2 animated music videos. DVD ’extras’ include live footage and a video from Giraffe Running (Hag & Greg’s other band).

The 4 new tracks featured on ’Spirito Di Daemo’ mark a deeper descent into the musical mineshaft which revealed it’s secrets to Daemien Frost when making their first LP, ’Corpus Daemo’. This time, the arrangements are brighter, heavier, triple-distilled and aged for 5 years in brilliant white jewel-encrusted caskets for your listening pleasure. 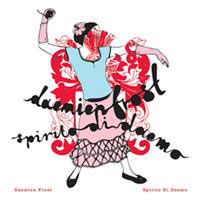 The band’s documentary, "Living On The Ledge", tracks the band’s progress through forming, recording and releasing their own records, touring and their ultimate demise. Fleeting insights into the individuals private lives, dreams and dreads abound. The band’s own dark and poignant way of dealing with the news of the outbreak of the war in Iraq in 2003 is masterfully star-crossed with frequent gleeful outbursts at the wonderful situations their DIY ethic has landed them in. The 5 music videos included on the DVD belie the band’s own irreverence for the norm, a quality Daemien Frost always insisted upon when choosing collaborators to work with. Live footage from Dublin, France & Italy rounds out the ’Spirito Di Daemo’ experience leaving the viewer feeling anxious… almost responsible. Like the chilling recollection of a moral obligation shirked, and long since forgotten.

The cover packaging was designed by Matthew Bolger (The Redneck Manifesto) and was hand-printed at Dexterity Press in Chicago by Jeff Mueller (The Shipping News, June Of ’44).

Where to buy our Records: You can buy our records direct from us through our online shop. Shops in Dublin which stock our records include Road Records (Fade St., Dublin 2), Tower Records (Wicklow St., Dublin 2), City Discs (Temple Bar, Dublin 2) & SpinDizzy (George’s St. Arcade, Dublin 2). Our records are distributed in Ireland by Cavallero through RMG-Chart and rest of Europe by Cargo UK.

Digital Downloads: All of our digital downloads are MP3s encoded at 256kps. We also don’t use DRM so you can easily put them on your iPod, burn them to a CD & listen to them in your car. The shopping facility, including digital downloads, is fully integrated with PayPal.

Next
Bumper To Bumper – A Heaphone Disco