Berlin-based Amoebazoid‘s new album ‘Zuckung’ is available now on C74 Music, a label "…devoted to works by artists the world over who use Cycling ’74 software technology to make astounding music and art."

Zuckung is available direct from the label , or via CD Baby , where you can also hear mp3 samples of the whole album. Which is good, because it saves me trying to describe it… 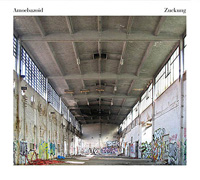 Zuckung takes its name from the German word for twitch — that burst of energy that separates two different trajectories; put enough of those in order, stir in a secret mixture of the intricate and spontaneous, and you have Amoebazoid’s c74 release, full of rattle and fun.

The album’s titles reflect someone whose serious technological chops never overshadow his ability to conjure up a mood. Together the pieces buzz and crackle with a range and style and approach figured in the MSP patches that provide the flexible and strangely articulated skeleton for the blasts of steroidally enhanced guitar, burbling synthesizers, and drumboxes that want to be line printers when they grow up. But the vertigo is strictly theme-park ride thrills and fun, from the first dizzying flashing lights of "Intersoup" and the dizzying lurch of "G’s Last Day" right through to the more-or-less gentle decelerations of "Shugäza", the album’s closing track.

Put on your headphones [that’s the way Keith thinks you should take the ride], buckle up, and hold on.

Previous
From Garden To Gourmet