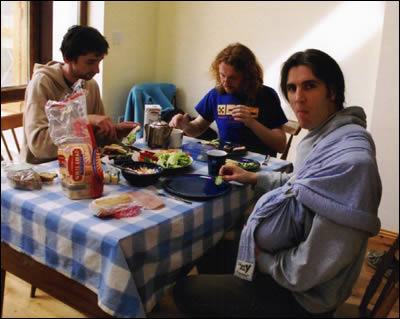 After years of never quite being happy with the results from my Roland VS1680 used with rented mics we wanted to try out a 'proper' studio. I made a lot of calls, went to see a few places, talked to as many people as I could, listened to whatever I could that was recorded in different places (I bought records and asked for demos off studios  some obliged, some didn't, usually citing copyright reasons). Eventually we chose The Works, despite not particularly liking the sound of the one thing we heard that was recorded there ('Miami' off U2's 'Pop'), for these reasons:

* the equipment: 2 inch tape, Amek desk with automation, individual headphone mixers (very handy), good outboard gear, great mic collection (Neumann U87s and KM84s, a big old Beyer ribbon mic, EV RE27, AKG 451, various B&K – proper mics like you see on the covers of 'real' albums, and plenty of em)
* the space: reasonable size live room that sounded good, big control room, separate room with tie lines (put guitar amp in here), vocal booth, machine room separate from control room
* the staff: spent a few hours talking to Rod, co-owner of the studio and got on really well with him … nice guy, lots of experience (20-something years recording, including the Stones, even Dylan once), and 'into mad stuff'
* the clientele: U2, Donovan, Bo Diddley and more … not acts I'd be into at all at all, but if there's big label money being spent here, then it's gotta be of a certain minimum standard
* the price: IEP2000 for two consecutive weekends … a lot of money, but good value (and, as it turned out, we got extra time cheap)

Preparation:
Due to persistent timing problems (we stay together pretty well, but tend to drift) we decided to use a click track. Made the clicks, taped em, and started individual practice on the songs we expected to record in mid-December. We also had weekly band practice (again playing to a click track  had to buy 3 sets of headphones and a headphone amp) from mid-January, plus 2 full weekends practice in Dublin and one whole week holed up in Mayo. In terms of hours playing together, we probably did the equivalent of 9 months' normal weekly practice between mid-Jan and the beginning of March. As well as practising, we took the songs apart, made sure we were happy with the arrangements  changed basslines and drumlines, added acoustic guitar parts, mandolin, keyboards etc. etc. (this is where our home recording gear came in real handy).

Originally we were supposed to spend 2 consecutive weekends in the studio but Rod called in sick while we were in Mayo so we had to rearrange things – eventually after some delicate negotiations with my boss we decided to go ahead with the Thursday to the Sunday of the following week, with a few hours on Wednesday evening thrown in by Rod to make up for cancelling the weekend.

Wednesday:
Just spent a couple of hours after work getting our gear into the place and getting it set up  drums in the main live room with an absorbent panel on each side (with windows in them so we could all see each other), me on the right with the bass (a 1963 Precision very kindly lent to us by Rod) plugged into a DI box, John on the left with his guitar plugged into a hole the wall which connected to his amp in another room.

Thursday:
Spent most of the morning tuning the drums and getting everything mic-ed up. We have a thing called a Tension Watch (made by Tama) which helps tune the drums  it measures the tension of the skin so you can get it uniformly tense all round. Need to use your ears though too  the note a drum makes is affected by the thickness of the skin as well as by its tension so having the top and bottom skins on a tom at the same tension doesn't necessarily mean that they'll be in tune with one another. Rod's experience really helped getting the drums sounding good, all together as well as individually  he'd be in and out of the control room saying "Kick drum", "Snare" and then he'd appear and twist one of the tuning lugs a tiny bit or put a bit of masking tape and cotton wool on one of the drum heads. Eventually Stephen's kit sounded better than it ever had before  it's amazing the difference that sort of shit can make. Micing the drums took place more or less at the same time as tuning  there was an awful lot of back-and-forthing and little adjustments in positions of the mics (especially the kick mic) before Rod was happy. Guitar was easier  once John had his amp sounding the way he wanted Rod just stuck an SM58 up against it and obviously the bass was easy, just plugged into a DI box. I had the VS1680 set up beside me to generate the click, and Rod also set up mics for me and John so we could talk to him in the control room. Next we played a bit and fiddled with our headphone mixers (a great idea  click and mics on track 1, bass track 2, guitar 3, drums 4, we had individual control over the mix we wanted to hear). And off we went …

Now the fun really started, and Rod started putting us through the mill.
Despite all the practice AND the click we still tended to drift a bit … it was like we didn't have the patience to wait for the beat, and Rod wasn't happy with that at ALL. We spent hours just doing drums, bass and guitar on the first track  it wasn't like we were making fuckups, but we just weren't tight enough. Rod would call us in to the control room every few takes and say things like "Concentrate on the third beat during the skank bit cos it's the most important you have to hit it BANG on", or he'd be at us to figure out which were the most important bits of the rhythm so we could hit them exactly right, or getting us to make tiny (half a bpm) adjustments in the speed. This might seem a bit anal to most people, but there's little I like more than a truly watertight rhythm section like you hear on old funk records  no fancy stuff, just each instrument fitting in nicely against the others. So this sort of stuff from Rod is just what I wanted  it was nice to have him doing it for a change instead of me being the baddie in the band. Had even more hassle with the next song, where there's a fairly complicated (for us) interaction between the bass and kick drum going on  caused the only bit of interpersonal tension between us and Rod during the session, and in fairness to him he backed off right quick when he saw I was very attached to the arrangement and it couldn't be simplified. Problem was solved in the end by dropping the click track by 1 bpm and all of a sudden we could play it.

The fun and games continued into


Friday:
by the end of which we had, after a lot of blood, sweat and tears, good takes of drums, bass and guitar for all six tracks. Things got easier as we went on, and we got the last track (despite its 13 tempo changes) in 3 takes. Spent the last couple of hours doing first attempts at vocals  Rod wanted to get vocals down next before adding any extra bits, just to put the song in context.

Saturday:
Did all the vocals in the morning, including new takes of the ones we did the night before. Rod had lots of stand closer to the mic, stand further back and song louder type advice. Took us quite a few goes singing louder, singing quieter, singing more in tune etc to get takes we were reasonably happy with.

Finally we added whatever extra instruments (mandolin, acoustic guitar, keyboards, bowed bass, fingerclicks, kazoo) we wanted in the arrangements. Came across a few problems here and there  Rod would spot someplace where we had never really decided whether the chord should be major or minor, that sort of thing. We were getting really tense about time at this stage  even if we got everything down today (which was starting to look unlikely  we were tiring and our playing was deteriorating) we'd only have a day to mix six songs. About half 10 that night (neither the band nor Rod was terribly keen on working late) Rod volunteered to give us Monday night for free, so that cheered us up no end.

Sunday:
Finished off the last little guitar bit and backing vocals and started mixing. The first song seemed to take FOREVER, the second song did too  and by the end of the day we only had 3 songs mixed. I couldnt really complain though  on my VS1680 it can take me two months to mix something to my satisfaction, and this stuff sounded better than anything we had ever done on that.

Monday evening:
Managed to mix ONE song. From now on Stoat will write short, uncomplicated songs only.

At this stage we were out of time, but Rod was generous, at this stage had become a fan of the band, and Donovan had cancelled his sessions for the week. So, well, he kept mixing  Id call in a lunchtimes and evenings to see how he was doing. On Tuesday evening he blew a speaker, and on Thursday afternoon he was finished. Charge for all the extra time was 300 euros.

The result? Three months later were still happier with it than we ever have been before with a recording. There are flaws  things not quite bang in on the recording, in the mix, but really mostly in the playing and singing. I suspect most of whats wrong with it comes from our own limitations at the time rather than the limitations of the studio or Rod. The whole process improved our playing and arranging enormously so at this stage if we went back to the studio I think wed do a much better job. Would we go back to the same place? Wed certainly strongly consider it, but I cant see us having so much money at our disposal again for quite some time.