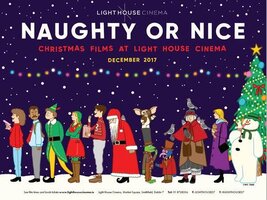 It’s the most wonderful time of the year! For the entire month of December in Light House we are dedicated to spreading Christmas cheer and giving our audience a fun and festive space to celebrate with their friends and family and enjoy all of your favourite Christmas films on the big screen. From classics like It’s a Wonderful Life to 80’s action in Die Hard to more modern heartwarmers such as Elf, we are really excited to present our Naughty or Nice season for 2017.

Die Hard
**Dec 1st Nakatomi Tower 80's Office Party + Die Hard screening.
Party 9pm, Film 10.45pm**
Dec 16th 21.15pm丨Dec 22nd 22.45pm
What is the meaning of Christmas? Family? Parties? Saving an office party from German terrorists? All of the above? John McClane crashes his ex-wife’s office Christmas party and unwittingly becomes the action hero the world had been waiting for. Bring your mates, grab a beer and get ready for the greatest Christmas action film ever.


Elf
**Elfeoke Dec 8 9.30pm**
Dec 2nd 13.00 丨Dec 16th 12.30pm丨Dec 21st 1.30pm丨Dec 23rd 14.00pm
Our favourite outrageously over-enthusiastic elf, Buddy is here again this year to spread Christmas cheer to even the most curmudgeonly cotton-headed ninny-muggins’ out there! And join us on Dec 9th for a screening of the film followed by big screen Elfeoke party!

It's a Wonderful Life
Dec 3rd 15.20pm / Dec 12th 20.30pm /丨Dec 20th 20.30pm/ Dec 21st 20.45pm/ Dec 22nd 20.00pm/ Dec 23rd 20.30pm
I’m sure we’re not alone in feeling that Christmas does not truly kick off until we’ve watched Frank Capra’s It’s a Wonderful Life at least once. One of the most emotionally resonant and beautifully realised films of all time gives James Stewart the defining role of his career as George Bailey, a man who finds happiness when all his carefully laid out life plans fall by the wayside.


The Muppets Christmas Carol
Dec 4th 18.30pm 丨Dec 9th 14.30pm 丨Dec 10th 13.00pm / Dec 17th 18.30pm / Dec 23rd 16.10pm
We all love Charles Dickens’ A Christmas Carol but we love it even more when The Muppets take over and sprinkle their energetic tunes and inimitable sense of humour to the classic tale. Join us for the most fun you can possibly have in Victorian London and of course you’re welcome to sing along!


Royal Ballet: The Nutcracker
Dec 5th, 19.15pm
Peter Wright’s nigh-on definitive production for The Royal Ballet ranks as one of the most enduring and enchanting versions of The Nutcracker. With its festive period setting, dancing snowflakes and enchanting stage magic, Lev Ivanov’s 1892 ballet has become the perfect Christmas entertainment, with Tchaikovsky’s sumptuous, sugar-spun music the most recognizable of all ballet scores.


Home Alone
Dec 3rd 12.45pm / Dec 17th 14.00pm 丨Dec 20th 18.00pm / Dec 21st 15.40pm
Ah, Kevin McAllister - not everyone would have the nerve to stand up to Joe Pesci but young Macauley Culkin takes him on with a series of genius, innovative, and increasingly painful DIY techniques in the classic comedy for all the family.

It’s about time we presented both Home Alone and its equally mischievous sequel back to back for you to enjoy over the Christmas season.

** Presented as a double bill with Home Alone.


Gremlins
Dec 15th 21.15pm/ Dec 19th 18.00pm
It just simply wouldn’t be Christmas without Gremlins. The embodiment of naughty AND nice, Gizmo and his gang of mischievous monsters are coming to Light House Cinema for two shows this Christmas so don’t miss them on the big screen!


Hollywood Babylon: Lethal Weapon
Dec 9th 22.45pm
You can’t spell CHRISTMAS without Lethal Weapon!
Kick off the christmas season in style with Hollywood Babylon’s 35mm screening of Lethal Weapon, celebrating 30 years of this action comedy seasonal classic. Detective Martin Riggs (Mel Gibson) hates christmas (because his wife died) and the only thing can turn his frown upside down this festive season is the friendship of his partner Murtaugh (Danny Glover) and a whole heap of justified ass-kicking.

Trust us you are not too old for this shit!


Rare Exports: A Christmas Tale
Dec 2nd 10.45pm
If you’ve had enough joy and good tidings this Christmas season, we’ve got just the cure with a late-night screening of Finnish cult horror film Rare Exports, a not so merry twist on the folklore of Santa Claus and his elves. Don’t bring your kids!


The Snowman (1982)
Dec 9th, 4.30pm
On Christmas Eve, a young boy builds a snowman that comes to life and takes him to the North Pole to meet Santa Claus. An animated classic for the whole family that looks and sounds beautiful on the big screen.
Tickets for this screening are only €5


Sleepless in Seattle
Dec 3rd 18.10pm / Dec 28th 18.00pm
Set over the Christmas period and all the way to Valentine’s Day; bask in the glory of Tom Hanks and Meg Ryan falling in love over the course of one gorgeous 90’s winter. Not quite a Christmas film but certainly one to enjoy cosied up in a comfy cinema with a glass or two of mulled wine.


Bolshoi Ballet: The Nutcracker
17th Dec 15.00PM
A holiday tradition for the whole family, The Nutcracker sweeps the Bolshoi stage for two hours of enchantment and magic. Along with Tchaikovsky’s cherished score and some of the Bolshoi’s greatest artists, The Nutcracker remains a treasure not to be missed!


Tickets and a full list of our Naughty or Nice Season of Films can be found here:
Naughty Or Nice Christmas Season | Light House Cinema