Neo-Nazi Father Is Killed; Son, 10, Steeped in Beliefs, Is Accused 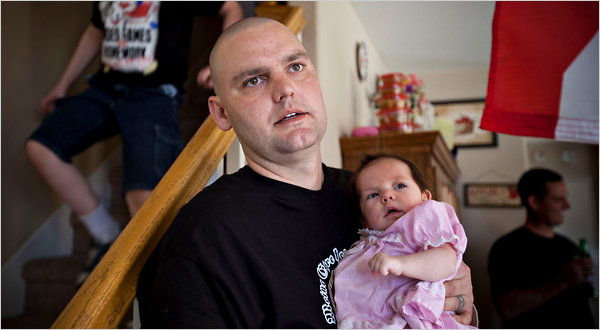 RIVERSIDE, Calif. — The day before he allegedly shot his father, the sandy-haired 10-year-old boy showed off a prized possession to a visitor. It was a thin leather belt emblazoned with a silver insignia of the Nazi SS.

“Look what my dad got me,” the boy said shyly, perched on the living room stairs, one of the few quiet spots in a house with five children.

A little more than 12 hours later, the police say, the boy stood near those stairs with a handgun and killed his father, Jeff Hall, as he lay on the living room couch. It was about 4 a.m. on May 1; paramedics declared Mr. Hall dead when they arrived.

The police say that the killing was intentional, but that the motives behind it are still not fully understood. But whatever the reason, it has cast fresh light on the fringe group to which Mr. Hall devoted his life: the National Socialist Movement, the nation’s largest neo-Nazi party, whose message stands in surreal juxtaposition to the suburban, workaday trappings of many of its members. 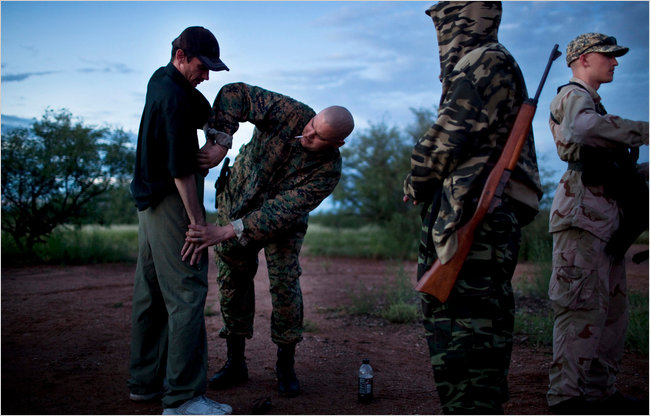 Mr. Hall, center, showed a fellow N.S.M. member how to pull a knife from his belt in Arizona, in preparation for a border patrol.

Mr. Hall, who led a chapter of the group in Riverside, Calif., east of Los Angeles, had predicted that his political activities — in a world rife with hatred, suspicion and violence — would lead to his demise.

What he could never have expected was that his death might come at the hand of his son, whom he was steeping in his beliefs of white supremacy and its obsessions with weapons, racist speech and Nazi regalia.

Over the last two months, The New York Times attended and documented a series of events held by Mr. Hall and the National Socialist Movement, or N.S.M., including virulent, hate-filled rallies as well as barbecues and baby showers in the backyard of his Southern California home.

Mr. Hall was a rising force in the party, which has capitalized on a tide of anti-immigrant sentiment to attract members — young racist skinheads, aging Ku Klux Klan members, and extremists on the left and the right. 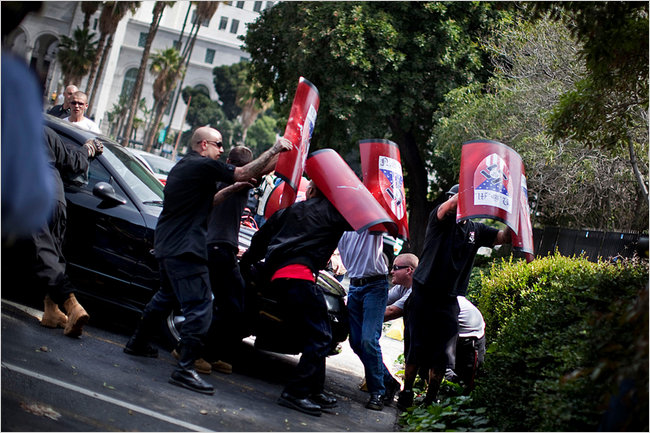 Party members shielded themselves when a demonstration near Los Angeles City Hall turned violent in April 2010.


Based in Detroit, it is the largest supremacist group, with about 400 members in 32 states, though much of its prominence followed the decay of Aryan Nation and other neo-Nazi groups, experts say. The movement is led by Jeff Schoep, a suit-wearing spokesman for what he calls a “white civil rights movement,” which he views as no different from other groups that defend minorities.

“If we’re a hate group,” said Mr. Schoep in an interview, “then Martin Luther King is a racist or a bigot also.”

Mr. Hall, 32, had embraced the movement and vice versa, earning a loyal following with his energy, unapologetic stands on race and frequent meetings and parties at his home. In recent years, he and other members had staged rallies that sparked street battles in several states, including a skirmish in Pemberton, N.J., during the group’s national conference in April, where rocks, tree branches, folding chairs and pepper spray were used as weapons.

After the fight, Mr. Hall — wearing a black Nazi military uniform — was hungry for more. “That’s why I joined N.S.M.,” Mr. Hall said, his eyes red from mace. “What a night! I can’t wait for tomorrow!”

Mr. Hall, a garrulous plumber with a cross and a skull tattooed on the back of his shaved head, ran as a National Socialist for a seat on a local water district last fall and won a surprising 28 percent of the vote. He planned to run for office again.

Mr. Schoep has said the group wants to try its hand at more elections, and it has even tried to mimic the populist language used by some candidates during the 2010 campaign, railing against banks receiving “tax-funded federal bailouts” while Americans continue to struggle.

“The government tells us we’re in recovery,” Mr. Schoep told a crowd in New Jersey. “Well yeah, if you’re a fat cat on Wall Street, if you’re some greedy Jew running a bank that got a whole bunch of kickbacks, maybe it is better. But not for us.”

Illegal immigration has also emerged as a potent neo-Nazi talking point, and Mr. Hall relished heading to the desert on armed “border patrols.” He organized his members and spent his plumbing proceeds on night-vision goggles and ham radio licenses. Mr. Hall also bragged that he was teaching his son to use night vision equipment and shoot a gun.

And while many of those involved in the N.S.M. are alienated from their families, or struggle to explain their beliefs, Mr. Hall was open about his activities with his children. His two-story home in Riverside served as the movement’s headquarters in Southern California. Inside, photos of his five children lined the walls and a copy of “Cinderella” sat on the bookshelf.

At a recent meeting, Mr. Hall showed a video he had made of the national gathering in New Jersey and the brawl. As the end credits rolled, a version of “Battle Hymn of the Republic” played, with modified lyrics.

“The white man marches on!” it said.

One of Mr. Hall’s young daughters was watching through a screen door and chimed in.

Raphael Ezekiel, a research associate at the Harvard School of Public Health who studied skinheads for his book “The Racist Mind,” said: “They’re people who feel very weak. So they’re a pushover if a person with a little bit of charisma comes along.”

And indeed, in March, Mr. Hall led a rally in Claremont, Calif., at which he preached discipline to his followers while grumbling about pat-downs from a large police contingent. About two dozen of the party followers traded insults with a larger group of counterprotesters. Mr. Hall took joy in the taunts of “Nazi Go Home!”

A few hours later, at a St. Patrick’s Day party complete with green shot glasses and German beer, Mr. Hall gamely officiated at a sack race for his children, using the same bullhorn that he had used to lead chants of “White power!” just hours before.

In one corner of the yard, a blue-eyed blond woman wore a white supremacist T-shirt that said, “Because the beauty of white Aryan women must not perish from the earth.” Nearby, a vendor had set up a stand, selling a ragtag variety of racially tinged paraphernalia.

Fund-raising was a constant concern for Mr. Hall. He told the vendor to look into selling Che Guevara T-shirts. “He’s a murderous communist,” Mr. Hall said, “but you sell those shirts, and you fund the movement.”

At a meeting the day before he was shot, Mr. Hall hoisted a swastika banner, not far from his newborn’s bassinet. His 10-year-old son listened as Mr. Hall spoke of finding rotting bodies on the border and discussed fears of being attacked with “AIDS-infected blood” if the group was to rally in San Francisco.

After the meeting, members drifted outside to smoke and drink.

The boy sat nearby on the steps. Was he having a good time? a reporter asked. Yes, he said, though he was annoyed by his four younger sisters. But he was the eldest, he added, and a boy. “And boys are more important,” he said.

That night, Jeff Hall apparently went out with some of his members. He arrived home about midnight and, four hours later, the police received a call about shots fired.

The boy is expected to appear in court later this month; he has been charged as a juvenile with murder, and his public defender said he might plead insanity. The boy and a younger sister had been the subject of a bitter custody battle with Mr. Hall’s first wife, with a series of allegations of abuse on each side. But Mr. Hall had eventually been granted legal custody.

On Saturday, a group of Mr. Hall’s followers gathered in Southern California to mourn their leader. One, an N.S.M. official who asked not to be identified because of the attention Mr. Hall’s death had brought to the group, said that the rallies would continue, and that Mr. Hall’s ashes would be spread on the border during a patrol. The boy was not mentioned.

“Today was all about Jeff, how he would want us to carry on,” the official said. “Nobody was looking for answers.”

This is the link to the photoblog done the day before the dude died
http://lens.blogs.nytimes.com/2011/05/10/a-family-tragedy-in-a-neo-nazi-home/?ref=us

I assumed this was the forum for neo-Nazi related items.

Not sure if that's accurate.

What the fuck is wrong with some people.

NY Times said:
The boy and a younger sister had been the subject of a bitter custody battle with Mr. Hall’s first wife, with a series of allegations of abuse on each side. Mr. Hall had eventually been granted legal custody.
Click to expand...

Jesus, how messed up was the mom?


The site doesn't let you link to the ones in the photo blog unfortunately.

The one in the pool is funny.
How come no thin girls ever sign up for a life of bigotry. hatred and stupidity?

The uniforms are fucked up though.

Location
The land of Yeah