A general thread for ye folke horror films, books and whatnot.
The IFI has 'Haunted Landscapes' coming up this month, featuring, amongst others, Witchfinder General, Quatermass and the Pit, and The Devil Rides Out.

Earlier this afternoon I watched Shadows: Dark Encounter, it was a bit weak if I'm honest, the'ghostly' part was extremely ham fisted and while there's a good story to be told this never really got off the ground.


I'm gonna try find A Field in England later on and hoping to get to some of Haunted Landscapes.

Oh, Whistle and I'll Come To You is worth a look

тхеодоре кацзынски said:
Oh, Whistle and I'll Come To You is worth a look

Great adaptation. I bought the DVD with the original and the new version with John Hurt, though I haven't watched the latter.

I find a lot of the classic folk horror films a bit "so what?". I don't think Witchfinder, Blood on Satan's Claw, etc. have aged terribly well. The Wicker Man pretty much stands alone as a perfectly crafted story and film. Much prefer reading this sort of stuff, the weird sense of dread tends to be completely killed by crappy acting and shitty special effects.

I watched these back to back the other day. Both adaptions of M.R. James' "Casting The Runes". @Ferox13 gave me a copy of Casting The Runes years of ago that has long since been lost in an external hard drive somewhere.

Night of the Demon is one of my all time favourite films. I first saw it as part of Alex Cox's Moviedrome series.

The ITV Playhouse production of Casting the Runes is a bit of a duffer unfortunately, with a hilariously un-scary giant spider puppet. It does have some good moments though and has Ian Cuthbertson of Children of the Stones (also well worth a watch) fame as Carswell, the baddie.

Night of the Demon is a great film. Here Carswell is played brilliantly by Irish actor Niall MacGinnis. The rubbery demon almost takes away from it, but the rest of it is so good it can be forgiven.


Looking forward to this IFI festival. I'm curious to see Valerie and Her Weekend of Wonders and the rest would be great fun on the big screen.

I ordered a copy of Witchfinder General a couple of days ago because I've never seen it. 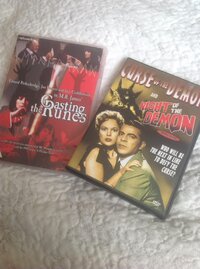 Cornu Ammonis said:
Much prefer reading this sort of stuff, the weird sense of dread tends to be completely killed by crappy acting and shitty special effects.
Click to expand...

I recently read a MR James compilation , loved it. The BBC adaptions were all on youtube but for the most part they are at best ok. Something definitely gets lost in the translation from the printed page.

Has any one seen Robin Redbreast?

It definitely belongs in a list of English Folk horror. I also enjoyed Wakewood (the 2009 Hammer film) and thought it better than the lack lustre Wicker Tree.

Robin Redbreast is on Youtube, I'll give it a go later.

So the consensus is books > films? I've more experience with the films so must try some books, I'll see if the library has any MR James.
@Cornu Ammonis , you bought that folk horror revival iirc? Worth a purchase?

тхеодоре кацзынски said:
Robin Redbreast is on Youtube, I'll give it a go later.

So the consensus is books > films? I've more experience with the films so must try some books, I'll see if the library has any MR James.
@Cornu Ammonis , you bought that folk horror revival iirc? Worth a purchase?
Click to expand...

Anyone seen Valerie and Her Week of Wonders? Children of the Stones is good too.

Ferox13 said:
Has any one seen Robin Redbreast?

It definitely belongs in a list of English Folk horror. I also enjoyed Wakewood (the 2009 Hammer film) and thought it better than the lack lustre Wicker Tree.
Click to expand...

Wakewood is great. I've only heard bad things about The Wicker Tree.

A Field in England is another great one of the genre.

Didn't know that. Thanks

Mixture of folk horror and kitchen sink crime thriller. I didn't like this movie first time I watched it, and it is a bit silly, but it gets better on repeat viewings. Ben Wheatley's gone on to do better things, like the aforementioned A Field in England
Kill List (2011) - IMDb

Bernie Lomax said:
Anyone seen Valerie and Her Week of Wonders?
Click to expand...

No, looks interesting though, you've seen it?

Do we have a working definition for Folk Horror? I would have thought it to be particularly British films wherein paganism and the landscape/social history plays a strong part in the story. Any other relevant factors?

I happened to watch Children of the Corn last night. Load of shite, if I'm being honest.

I wouldn't call quatermass and the pit a folk horror. Its set in the centre of london.

Bernie Lomax said:
Anyone seen Valerie and Her Week of Wonders?
Click to expand...

I have the soundtrack, never seen the film though.

this link touches on tv/film, a lot of which have been mentioned on this thread already.

bought the BFI Ghost Stories At Christmas last Christmas for myself, really nice watching for that time of year but as someone said, was a bit disappointed aswell, 50/50 split between great and average. The Signal Man was my fave I think of that set. watched A Field In England for first time last week, absolutely loved it, been meaning to watch again.

Huge Wicker Man fan, the book that it is loosely based on, Ritual (although I read recently that Robin Hardy or Anthony Shaffer dismissed the idea that the movie had little or no links/inspiration to/from the book, which I find hard to believe) is great folk horror. must delve into more fiction reading of this sort.

The 70s ITV anthology Thriller by Brian Clemens has a handful of episodes that could fall under that category. each episode is about 70 mins so you're talking just shy of movie length. Based on that link above I snagged Penda's Fen and Children Of The Stones for myself. Have Robin Redbreast on my list too, must get around to it. another 70s BBC production called Dead Of Night is very good. well, 2 out of the episodes are very good, one is shit. There was 3 or 4 more aired originally but BBC lost/used the tapes. shame

Recently picked up Psychoville and Inside No. 9 complete seasons. Made by And starring The League Of Gentlemen dudes. Only started Psychoville a couple of nights back. as expected, very bleak, northern english, similar humour to LOG but love their sense of oddness, falls in well enough to folk horror idea, kind of.
New posts