I follow stuff that is popular and look at the off gif and then forget it exists. This is a thread for not caring about what you were talking about last week, and the gifs.

Anywhooo my intro is I've been half following the introduction of Shola Shoretire into the Man Utd machine. The kid must be rediculously talented, 17 years old thrown in the mix with the pro's in Europe. I will not follow Man Utd or watch games though. 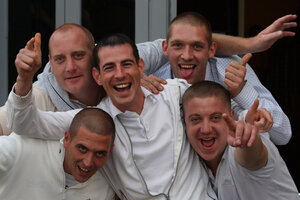 I go through phases of being interested in snooker, though I dunno if I have the patience to sit down and watch a full game these days.. Judd Trump's crazy cue ball control has got me back into it lately:

ann post said:
I follow stuff that is popular and look at the off gif and then forget it exists. This is a thread for not caring about what you were talking about last week, and the gifs.

Anywhooo my intro is I've been half following the introduction of Shola Shoretire into the Man Utd machine. The kid must be rediculously talented, 17 years old thrown in the mix with the pro's in Europe. I will not follow Man Utd or watch games though.
Click to expand...

I liked when they brought Shoretire on and the commentators spent about 2 minutes laughing at how they should try and pronounce his name, and their consensus in the end was that they'd need to ask somebody from Newcastle.

My 8 year old's gotten big into to football over the last few months so I'm starting to find out a bit about by osmosis. I even watched most of the man utd and west ham match with him last month.

He's also gotten big into the marvel movies so I've been watching 1 a week with him since Christmas. Definitely wouldn't have done that if it wasn't for him. But I'm enjoying them.

Bet he voted for Joris

Poor oul Marvin Hagler dying is what brought me here. Used to watch his fights on Saturday afternoons with my Da sometimes. Don't think I've watched a professional boxing match since ...

Into the tightest fuckin' finish here between Milwaukee Bucks and Brooklyn Nets...1 point in it, and five minutes left. Hot damn.

I watched the france germany game last night. I missed the guy coming in on protest though.

mbappe is good fun, fair play to him

Was a pretty good match actually, good to see the Germans still aren't afraid of just fouling their way around the pitch

Meant to say it was 2-2, and the deciding game in the playoff with Bucks having come back from 0-2 to level it after Kevin Durant opened his cunterly mouth to talk shit after Nets were 2-0 up.

Nets won. Giannis choked in the final quarter. Was hoping Durant would be forced to eat his words whilst shoving his tail up his hole too, but fair play - 49 points from one player is a pretty epic performance.

Watched that on TV a few weeks ago, good comedy

After half following this thing I'm going to say Italy 3, England 2.

Watched a bit of the tennis with the father in law this afternoon.

I watched a fair bit of it but turned it off to watch the highlights of the donegal game which was amazing yesterday.

Figured about 30 mins in italy had taken control of the game.

Kinda thought it was a nice metaphor for how England has been working for the past few years. Storm in with a cheap shot, act like you've won while actually playing 100 damage limitation and rear guard action for the rest of the match. I switched on the penalties bit but was kinda confident Italy would do it - For England it was 'rub brexit in their faces', for Italy it was 'we've been ravaged by this pandemic, can we not bring a smile home' kinda thing.

The racism stuff today would be pointed at Europe if they had won and the English media wouldn't be concerned about it at all, and i'm not sure the Neville's et al would be speaking out against it. That game seems to work as a conduit for that kinda stuff, maybe because it is kinda an English game, who knows.

Saw the last 15 minutes or so of the Donegal game, was a good one for sure

Game six of the NBA finals tonight in Milwaukee with Milwaukee leading the series 3 - 2 after the Phoenix Suns went 2 - 0 first two games and many said, "it's going to be a sweep", "it's Chris Paul's time to shine" etc

The end of game five was excruciating with Bucks pipping it by four points, 123 to 119.

So, it's all turned around, and if the Bucks win tonight, they get the prize. Pressure is on the Phoenix Suns big time. Chris Paul is adorable, so I'm hoping the Suns win tonight. Tough one to call, both are pretty likeable teams. The Phoenix Suns fans are intense and hilarious.

Starts at 2am.
New posts