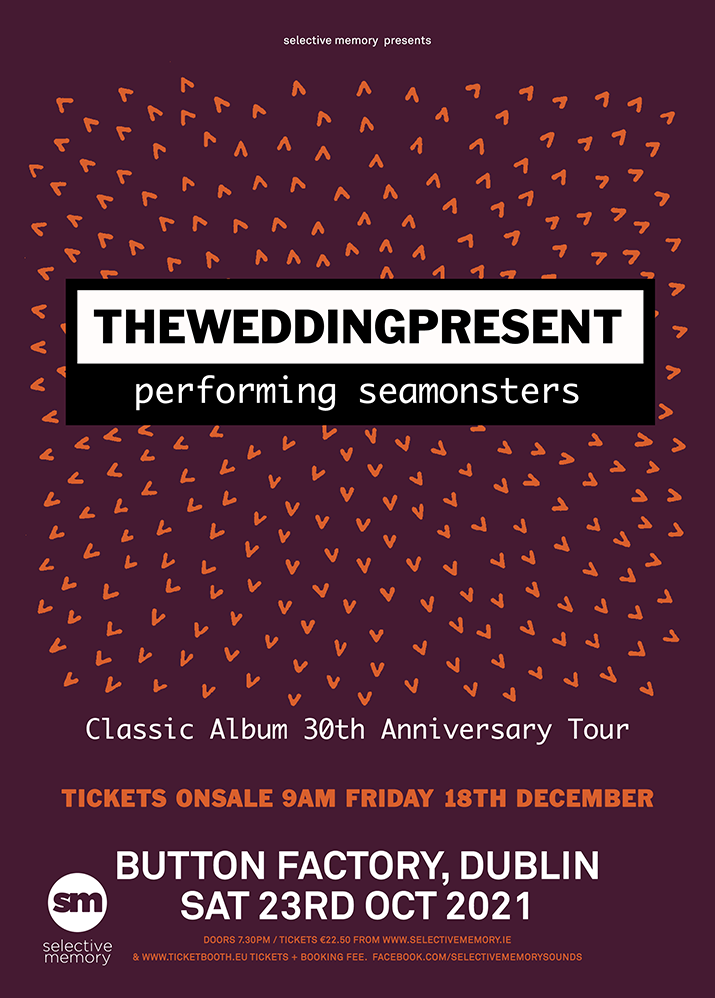 The Wedding Present will be playing a series of concert dates throughout 2021 to commemorate the 30th anniversary of the release of their pivotal long-player, Seamonsters.

Tickets for the Button Factory show on Saturday 23rd October cost 22.50eu (+bkg fee) and go on sale 9am this Friday 11th December from www.selectivememory.ie

“The boy Gedge has written some of the best love songs of the ‘Rock ‘n’ Roll’ era. You may dispute this but I’m right and you’re wrong!” – John Peel

After recording with Steve Albini on their remake of 1990’s ‘Brassneck’ single, The Wedding Present decamped to Minnesota to record a full album with the notoriously abrasive producer. It proved to be a perfect match of band and producer, and Seamonsters turned out to be the most emotionally powerful album the band could have hoped to make. Albini’s dramatically stripped-down sound and David Gedge’s utterly wrecked lyrics work to wring every last drop of desolate anger and angst from the songs. Simon Smith sounds like he’s battering his drums with concrete blocks instead of sticks, Keith Gregory’s wire-taut bass sounds like it’s stalking the guitars, and Gedge and Peter Solowka’s guitars explode into flaming balls of noise and sound when they aren’t lurking in the mix like barely restrained demons. The simplicity of the recording, the intense range of dynamics in each song, and the almost painful amount of passion the band injects into every note is breath-taking. Add in Gedge’s ripped-from-his-heart vocals and his intensely felt, quite bleak, lyrics and it gets close to emotional overload territory. The Wedding Present had always had a reputation for being dour and straitlaced, but there was usually still some humour in Gedge’s turns of phrase, a jaunty feel to their high-speed guitar strumathons, and an almost fun energy in their poppiest songs. There’s absolutely nothing about Seamonsters that isn’t the darkest, unhappiest thing one could imagine. Luckily, the gloom is tempered by how catchy the songs are – hooky tracks like ‘Dare’ and ‘Dalliance’ are hard to shake. It’s also made easier to swallow by the quieter songs like ‘Carolyn’ and the overall dynamic approach, which allow Gedge some space to croon. Indeed, this is the album where Gedge moves beyond being a solid vocalist to being a great one. Seamonsters is The Wedding Present’s masterpiece, a long look into the abyss that feels like a knife twisting deep into the heart, and sounds like a glimpse into the bare souls of the band. It’s not easy listening, but it is essential. [Tim Sendra]

RCA Records are planning to issue a thirtieth-anniversary re-release of Seamonsters in May, 2021.

Tickets for the Button Factory show on Saturday 23rd October cost 22.50eu (+bkg fee) and go on sale 9am this Friday 11th December from www.selectivememory.ie (This show will be run in accordance with existing government Covid-19 regulations at the date of the performance.)