Overview:
OK Computer is the third studio album by the English alternative rock band Radiohead, released on 16 June 1997 on Parlophone in the United Kingdom and 1 July 1997 by Capitol Records in the United States. OK Computer was the first self-produced Radiohead album, with assistance from Nigel Godrich. Radiohead recorded the album in Oxfordshire and Bath between 1996 and early 1997, with most of the recording completed in the historic mansion St. Catherine's Court. The band made a deliberate attempt to distance themselves from the guitar-oriented, lyrically introspective style of their previous album, The Bends. OK Computer's abstract lyrics, densely layered sound and wide range of influences laid the groundwork for Radiohead's later, more experimental work.

On delivery to Capitol, label representatives lowered their sales estimates because the album was deemed uncommercial. Nevertheless, OK Computer reached number one on the UK Albums Chart and became Radiohead's highest album entry on the American charts at the time, debuting at number 21 on the Billboard 200. Three songs from the album-"Paranoid Android", "Karma Police" and "No Surprises"-were released as promotional singles. The album built on the band's worldwide popularity and has to date sold over 4.5 million copies.

OK Computer received considerable acclaim upon release. Prominent British and American rock critics predicted the album was epochal and would have far-reaching cultural impact. In subsequent years, the album has been frequently cited by critics as one of the greatest albums ever recorded. OK Computer initiated a shift away from the height of Britpop's popularity to the more melancholic and atmospheric style of alternative rock prevalent in the next decade. Critics and fans often remark on the underlying themes found in the lyrics and artwork, emphasising Radiohead's views on rampant consumerism, social alienation and political malaise; in this capacity, OK Computer is often interpreted as having prescient insight into the mood of the 21st century. An LP reissue in 2008 contributed to a popular revival of vinyl records, and an expanded CD reissue in 2009, apparently released without the band's foreknowledge or permission, brought renewed attention to the album and its legacy. 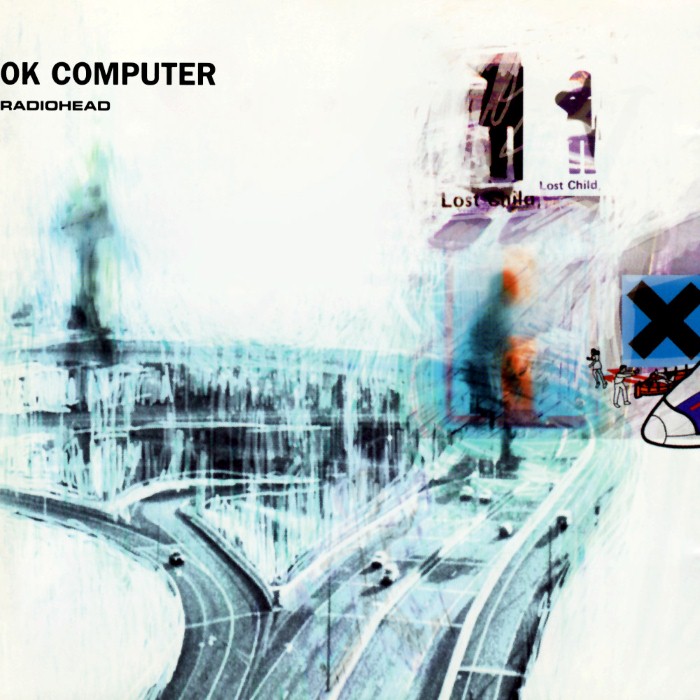 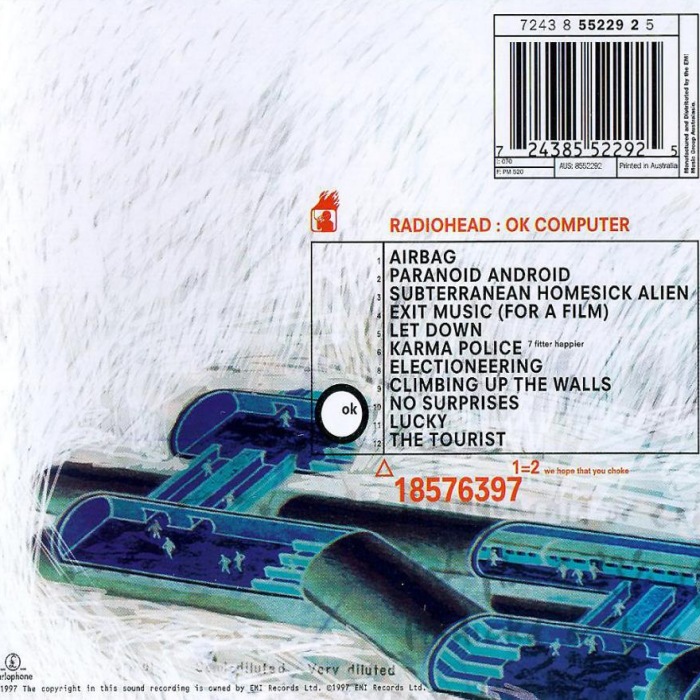 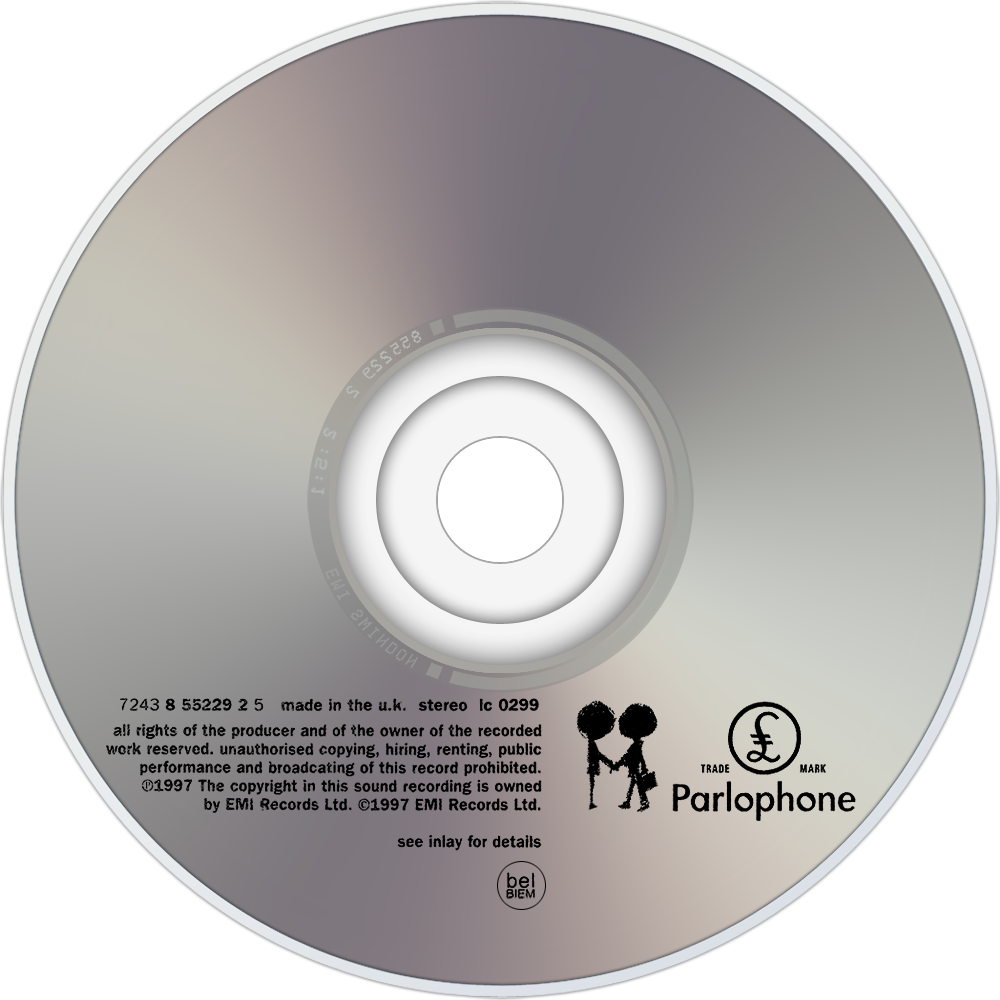 Supposedly there was 20+ versions/mixes of No Surprises alone.

Airbag:
Always felt very intro-y when I listened as a kid, never disliked it but didn't really get its depth and completeness until recent times. It is a beautiful vortex of proggy '70s, US alternative, shoegaze, and some of the then current trip-hop effects/production.

Still sounds as dynamic as it did at the time. The idea of a hit song of its length blew our tiny little teenage minds. A friend of my used to forensically unpack the lyrics, "kicking screaming gucci little piggy" etc. I think it is still a decent, epic Queen-esque pop/rock tune in a similar mold to Smashing Pumpkins at their contemporary best, and hearing it live in the RDS in '97 was a ginormous thrill. It is kinda corny but I forgive it its corniness.

Very '70s acidy folky vibe off this, I never hated it but I've never loved it either. Lovely production but a bit of a slight song, especially in its company on this record. The "Uptight" sections tie it back to the 1990s neatly.

Exit Music (For A Film)

Again dripping in the 1970s, very Spanish (flamenco??) sound off this and various other Radiohead songs throughout their oeuvre, see 2016's Present Tense for a recent example. It's a ballad, slightly off-kilter but surprisingly conventional even with its doom-synth upturn. The lyrics are in some ways a 1990s counterpart to the Beatles' "She's Leaving Home", with added spite for good measure.

One of the peaks of this album. I detested it when I first heard it, seems weird now, but to my young ears it sounded like atonal garbage. Now it is just a perfect dose of teenage melancholy even though it was written as Yorke et al approached 30. I love the soaring, anthemic vibe of this tune, it should really have been a ginormous hit independent of the album. The Byrds-y vibe of the song continues into an astounding late stage peak of bursting out of the quotidian ennui glory.

With a piano figure that borrows heavily from the Beatles' Sexy Sadie, this song was a huge and (in retrospect) odd hit and another peak of the record. The song's success was helped hugely by a very strong music video that did the rounds at the time.

The lyrics are surreal all but nonsense basically pointing at not being a dick otherwise you'll get your comeuppance. IIRC the song was treated as something of a joke by the band but again myself and pals discussed intently the meaning of evocative lyrics such as "Hitler hairdo" etc.

Been rediscovering the brilliance of Radiohead over the last few months and working my way back through their albums until I finally got to this one a few weeks ago.

I think it's massively over-rated. It's horribly bombastic and overblown. At its best it's got some great sing-along tunes (Karma Police), at its worst it just sounds like Muse. Did this predate Muse? If so, then I hold Radiohead responsible for the Muse monstrosity. If not, why the fuck would Radiohead want to sound like Muse?

It's the album that put me off Radiohead back in the day, after really liking The Bends. And at least I'm consistent in that I still don't like it. The ones that came after are much better. It's no In Rainbows, like.

Probably. The proof of this will probably be me singing along enthusiastically to every track off it on June 20th.

Muse were a frail facsimile of Radiohead when they began in about 2000, 3 years after this album was uhm dropped.

I can't really listen to this album anymore. It's probably one of the last albums that I absolutely listened to death and I'm just sick of it now. Though I can dip in and out now and then.

I remember writing in the other Radiohead album club thread about having a love/hate thing for them down the years. The first time they lost me was just after this album came out. It was after that RDS gig that @Scientician 0.8 mentioned. That was peak Radiohead hype imo, and it drove me a bit nuts. I remember every fucker having a t-shit that said 'kickingscreamingguccilittlepiggy' that they got at that gig. I dunno, it was just saturation, and I thought there were better albums out around that time (peak brit-pop time too).

The first song I heard from this album was several months before it came out. The first War Child compilation had 'Lucky' on it. I was obsessed with that song. The rest of the album, when it eventually came out, didn't stack up.

I also remember the singles from this album being released in sets. There was at least a CD1 and CD2 for each. Possibly even a third for some. I bought most, if not all, of them. My next 2 favourite songs from this period of Radiohead were from the singles.


The other was Palo Alto which I can't find any decent version of on youtube.

Remember that video from Paranoid Android too? That cartoon. I remember that was an actual cartoon series that was shown on channel 4 around that time. And it was terrible.

I might get up enough interest to listen to this again later. Not now though. And it is a great album. Just, I've had enough.

Aside from my older brothers, no one I knew liked Radiohead so didn't have any of that saturation.

I'm interested in what age bands are when they record these seminal albums, so I just worked it out. Wikipedia says they began rehearsals in July 1996 so when they started they would have been:

Album was released in June '97 so a year older by then.

that's probably what put me off them forever

I do like this album a lot but Radiohead Mk.1 (Pablo Honey to OK Computer) just aren't a patch on the Mk.2 model. Though you can hear the seeds for the later albums here ("Exit Music" is pretty much their future) and it works a lot better than Pablo Honey (obvs) and The Bends (which has some amazing tracks but has aged terribly). When the album veers more towards that indie rock style (like on "Let Down" [though that cool synthesiser bit at 3:30 is wonderful]), it drags but, even with huge amounts of overexposure, the singles are class and "Electioneering" is probably their best full rock song (fuck off "Creep"!).

The paranoia and unease that runs through OK Computer is pretty timeless - hard to hear lines like "Your Hitler hair-do is making me feel ill" and "We hope that you choke" without feeling a bit depressed about the present political situation (and that was true in 1997 and 2007). "Climbing Up the Walls" is probably the best example of that queasy, unsettling dread. The effects on the multitracked vocals shift throughout the song, the strong beat is overblown, and the music is a heady much of clean guitars, fuzz and strange samples in the background. Fuck.

Haven't listen to this all the way through in a long. Listening to some tracks now, It still sounds great. I keep thinking of a 90's/00's pink floyd. I have 3 radiohead albums and always keep an ear on what they are doing, but the relentlessly moany vocals have always been a bit of a barrier for me. Still it's great to see a big band that are pushing it with each album.

This isn't the greatest album ever made, it's not the best Radiohead album. But it's 50% terrific, and 50% muddled tosh. But when it's singing, jesus, it's incredible.

Don't know this as I've never been fond of Radiohead. In Rainbows was alright, but there's just something about their music I can't get a grip on enough to get into it.
Are these the only band so far to get 2 albums in TAC??

travispickle said:
Don't know this as I've never been fond of Radiohead. In Rainbows was alright, but there's just something about their music I can't get a grip on enough to get into it.
Are these the only band so far to get 2 albums in TAC??
Click to expand...

I'm sure there will be another Neil Young album or two.

As regards B-Sides Palo Alto was indeed amazing as was
Polyethylene parts 1 & 2.
Music information in first post provided by The AudioDB
New posts