Dublin-based noise label. Three new releases for you, featuring two Americans and one Dubliner! They are all released on 4th May 2010

This track is beautiful; there are no other words for it. Taking up the entire runtime of the b/card, Beat Me Outta Me is a subtle track mixing classical strings and subdued noise that becomes more and more present as the track continues. This is the soundtrack to that moment in movies where the main character not only is lost physically, but mentally, where they know that everything after this moment will change. Lost in the forest, this noise symphony will guide you home.

Beat Me Outta Me (sample)

"In 1234 Gregory IX expanded the collection, creating the Corpus juris canonici, to which the Liber Sextus was added in 1298 and the Clementines in 1317. These seven books, and the two extravagantes added later, were glossed. Increasingly homophobic theologians, including fanatic friars from Thomas Aquinas to Luca da Penne, influenced the glossators. They and Inquisitors inspired feudal, royal, and municipal laws to ordain the fining, castrating, and even burning of sodomites—all penalties that remained foreign to Canon law itself even when revised by The Council of Trent (1545-1563)." -- Arthur Evans, 1978

T. Boettner's fire island, AK project is high-concept queer noise at its finest. This two track record opens with Beatific Vision, a simply crushing track made with contact mic'd silver bullet vibrators that swallows up and spits back out the voices that surround it. Veering from restraint to all-out attack, this is the centrepiece of the record. Secondly is Ghettoes of Nightclubs, a high-pitched mic feedback track that's the soundtrack to queer revolution. The feedback sounds like dangerously enticing whispers, leading you in, aided by a little bit of synth, until you're backed into a corner and there's no way out. The title is taken from Guy Hocquenghem's The Screwball Asses and there's a link to a YouTube video for the track with text from the book below.

Somewhere in a small, provincal village, a young man has had enough and snaps, live on stage, in front all of the locals. He vanishes leaving behind a pub full of bodies and no forwarding address.
Karaoke Cemetery is an eleven track concept album of harsh, microphone noise. Most tracks are about 90 seconds long, with the longest being about three and a half minutes. Ranging from drone (A Coat of Fire), trundling mechanical-sounding noise (Dead Eyes and Steady Hands), musique concrete (Oxygen Rush) to all out Masonna-esque mic noise (A Coat of Blood), this is a record that packs a lot (and a lot of tracks) into its 20 minute run-time

Full-Length Samples:
Dead Eyes and Steady Hands
A Coat of Fire
A Coat of Blood

Postage and packaging is not included and is €2 worldwide (That's for one, two or three items. You can have the entire bundle posted to you for €2, so - the more you buy, the cheaper it is, etc.)

ORDER: [email protected].
Note - this is not the paypal address - the paypal email will be supplied via email.

I (Where is This) also have a new record out called Fucker on Dutch label Hoarse Records. Limited to 30, I'll have a bunch for trade next week or so. They're also available direct from Hoarse. Artwork/sound sample below. 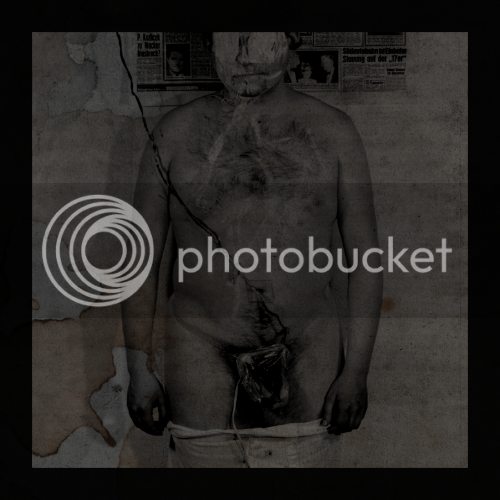 will these available from anywhere around town? liking the 'fire island,ak' stuff from that video...