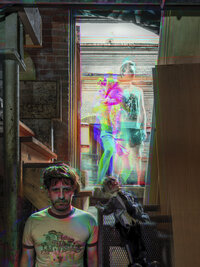 Following the recent release of new album Sonic Citadel, Lightning Bolt have shared the video for "Blow To The Head," directed and animated by Caleb Wood. The video initially premiered on Adult Swim's Toonami block this past Saturday. Lightning Bolt will be touring the US and Europe this fall including sets at Desert Daze and Le Guess Who? Festival, with more dates to be announced. The duo's Load Records back catalog will be reissued by Thrill Jockey throughout 2020.

Over their career, the incomparable sounds of Chippendale and Gibson have been built on the ebb and flow between the power of raw, unbridled simplicity and a boundless, childlike sense of wonder. Sonic Citadel marks the duo’s most varied and diverse work since their seminal album Wonderful Rainbow (recently reissued on Thrill Jockey), exploring a large breadth of emotions between and within each song. Gibson and Chippendale again recorded with Seth Manchester at the esteemed Machines With Magnets to capture the abandon of their music with clarity and Gibson’s incredible dynamic range clearly to make the record as visceral an experience as their live performances.

Fairly sure my heart rate increased by about 30% just watching that. Mega.

Reminds me of Beastie Boys Shadrach

I think it's just one of those melodies, it's also Paint it Black, Rhiannon and Children of the Grave

Lili Marlene said:
I think it's just one of those melodies, it's also Paint it Black, Rhiannon and Children of the Grave
Click to expand...

Where's the "perceptive" emoji when you need one?!