This is a Hefty Horse and Popical Island combined presentation. Imagine the power! 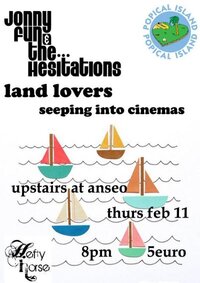 Don't listen to us, listen to Road Records' review of Carpe PM, the debut album by Sunderland's most melodically whimsical pop masseuse and his faltering band of Deadlies:


Road Records said:
The debut full length album from jonny fun and the hesitations, featuring nice delicious slices of good time indie pop on their own label. the band is based around english born songwriter jonny fun [now residing here in ireland] and his ever changing backing band the hesitations. on this recording his band are andy walsh, padraig o reilly [yeh deadlies], annie tierney [yeh deadlies] and dave green. guest vocal harmonies are courtesy of kelly mounsey and jennie redmond. the album features a really lovely almost folk tinged collection of indie pop sounds, a little bit belle and sebastian with the more rustic folk sounds of the likes of king creosote maybe. its also got a little bit of the jangly indie pop vibe of the likes of orange juice or teenage fanclub with plenty of the kind of twee sounds of the pastels. very pleasant ear candy indeed. january 2010
Click to expand...


Land Lovers appear for the first time in 2010, and they'll have a new bass player too. A fascinating development, you'll agree.

Seeping into Cinemas feature members of Betamax Format, but are very different to the latter from what I've heard. Lovely lo-fi pop manoeverings.

This is on next Thursday.

This is gonna be deadly!

I'd say this will be only fantastic.
H

My Name Is Prince.

Seeping Into Cinemas are amazing. it is indeed Barry who plays guitar with Betamax Format but soundwise it's a completely different and awesome entity

This is on tomorrow. I suppose this is the kind of thing you all do nowadays rather than posting on Thumped, so I'll expect it to be uncomfortably packed, dangerously so.

All your dreams will come tonight (c. 8:30 PM), if you've always dreamed of an enjoyable gig at Anseo featuring Jonny Fun & the Hestitations, Land Lovers and Seeping into Cinemas.

livewire presents: AND SO I WATCH YOU FROM AFAR at Crane Lane, Cork - Fri Feb 12