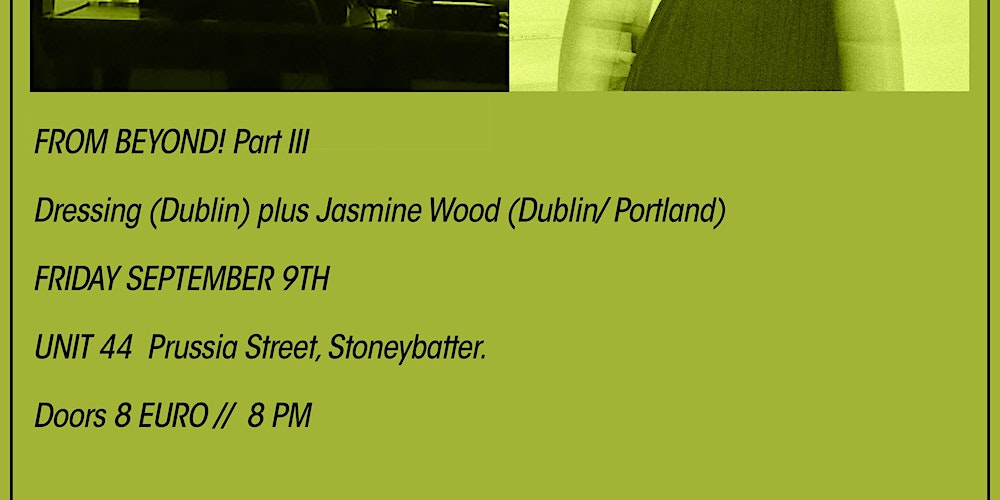 Dressing is a relatively recent project beginning with the release of two tapes in 2021 and an impressive follow up on the Oxen label this year.
Kirwan employs a sonic palette which ranges from harsh blasts of noise to fragmented melodic phrases to blurred tape manipulations creating an utterly alien, disconnected atmosphere. This is Kirwan’s first foray into sound having previously worked with photography, video and sculpture. The work is highly considered and tightly composed whilst still maintaining a sense of abandon and confrontation.
Dressing first came to our attention through Krim Kram label owner David Murphy which spawned a number of ‘’Who is this person?’’ emails, gobsmacked by the strength of the first releases. Thankfully the mystery has been solved.
‘‘Though Kirwan’s work certainly seems to engage with the still-thriving tape noise tradition and all its innumerable facets, there’s something fundamental about it that sets it well apart, something I can’t quite yet put my finger on. Perhaps because it is likely not something, but many things: the rage buried within even the most anaemic of distortion blasts, the spiderweb logic that imbues the disarming cut-ups and jagged layers with some kind of sense, the way the sound seems to deny even as it explores.’’

Jasmine Wood is a multi-disciplinary artist and composer, originally from Portland. She has previously written and performed as the Indie-rock/Shoegaze band Haste and in 2021 released her album “Pink Sun” under the name Lota Leona. Wood combines minimal noise guitar and meditative fuzz with field recordings and haunting vocals. Incorporating art-house cinema into many of her performances, she has completed several live film scores. Now based in Dublin, she is currently developing new work under her own name that combines elements of her previous work with influences from romantic classical piano. Pulling much of her inspiration from cinema, Wood provides a fully immersive audio/visual live experience.

This is tomorrow. Tickets still available but you don't need to buy in advance.