Dark Room Notes began life as a group of guitar-obsessed teenage boys in the west of Ireland, bashing out cover versions of their heroes' hits in their parents' dusty basements, while trying to find their own niche in the world of music. Gradually tastes changed, the musical outlets offered by a small town on the edge of Europe began to feel stale, and members left to pursue other lives and dreams. Eschewing the company of other humans, founding members Ruairi Ferrie and Ronan Gaughan found comfort in machines, first replacing a newly familial bassist with a synthesiser, and eventually finding a drum machine a worthy substitute for an academically-minded drummer. Hanging on to their guitars, the two found a Battles-like level of musicianship ever so slightly beyond them, and it became clear that a further pair of hands would be needed in order to help man the growing number of machines. Keyboard player Arran Murphy was brought in, closely followed by drummer Darragh Shanahan, and Dark Room Notes' lineup was complete.

Their debut single on BBE Records 'Love Like Nicotine' contains a remix of the single courtesy of Flood and bonus track Electrocoin. Their debut album “We Love You Dark Matter” will be release worldwide in April 2010.

“We Love You Dark Matter” has been nominated for the Choice Music Prize for best Irish album of 2009.
www.myspace.com/darkroomnotesireland

We Cut Corners formed this year out of the ashes of the ludicrously titled Camogie Lovers. The line-up remains the same which is to say they changed their name, however their manifesto remains unswervingly constant, that being to simply be in a band. Their influences include Titus Andronicus, Phoenix, Ryan Adams etc. They play short songs on drums and guitar and hope to record these songs this year. www.myspace.com/wecutcorners

The Vagabonds are Dublin based 4-piece punk-rock band. However, they transcend the mediocrity of the indulgent, egotistical and nepotistic ways, some of their better known peers are renowned for. They drive through the political and social landscape of their songs with little care for who may take offence along the way, if this band offend you; you don't understand. The Vagabonds have no time for bigots, racists and homophobes, if you are any of these things you should not listen to this band. Connected Magazine has called "a refreshing blend of tuneful punk melodies with grimy garage riffs to create a totally infectious sound" and renowned Limerick DJ, Alan Jaques, has refered to them as "Bob Dylan fronting The Clash". You can listen to The Vagabonds at www.myspace.com/thevagabondway 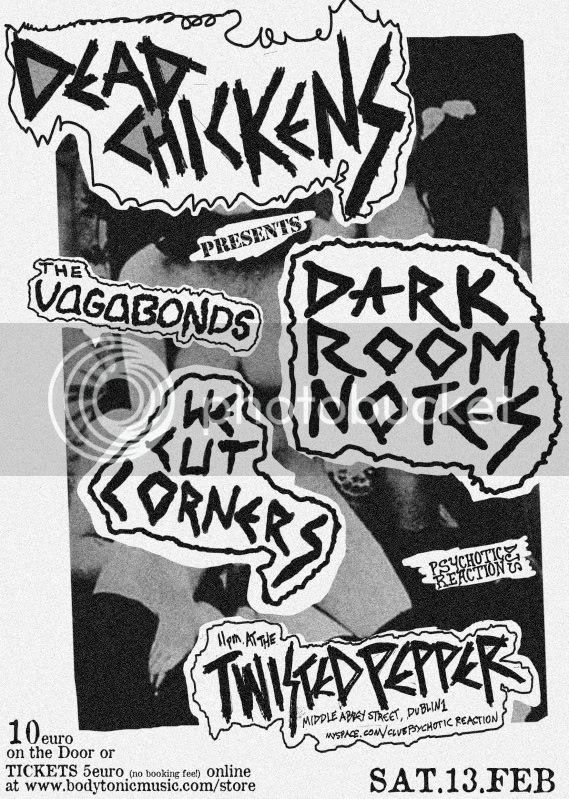 The Beat Goes On - Celebrating 20 Years of Music at CSN - March 7th, Cork