BATS mark the launch of their new EP ‘Cruel Sea Scientist‘ on December 15th with a gig at the Lower Deck in Portobello. Admission is €10 and also gets you a copy of the EP. 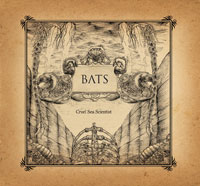 Hatched from tiny eggs resting in the heart of a frightened child, BATS (featuring ex-members of Martha Washington) have different coloured eyes. Bats have been carving a following within the Irish independent scene playing a lot of different gigs including supporting the “Locust”, “Gang Gand Dance” and an Irish tour with "Warlords of Pez". Bats are a mix between the heft of "Circle takes the square" and the melodies of "Blood Brothers" in a duel to the death! This will be release number five on Armed Ambitions records in just under six months.


Also playing at the launch are Terrordactyl (who have former members of Puget Sound, Kelsey & Apostles and current members of Adebisi Shank), Crayonsmith and Sarsparilla.

More details on the forum.