Adebisi Shank: This Is The Album…

Produced by J. Robbins (Government Issue, Scream, Jawbox, Burning Airlines and Channels) in Magpie Cage studios in Baltimore, Maryland, the LP was mastered by TJ Lipple (Guitarist with Aloha) at Inner Ear studios in Washington DC. Immediately after recording was finished, the band headed out on a Japanese tour supporting Lite, where their debut EP (This Is The EP…) received its Japanese release on Parabolica Records.

The album is released on The Richter Collective label (home of Bats, We are Knives, Marvins Revolt), and is available for pre-order now from www.richtercollective.com.

Launch gigs take place in The Whiskey in Cork (11th September), Cleere’s Theatre in Kilkenny (12th of September) and in the Boom Boom Room in Dublin (26th September). 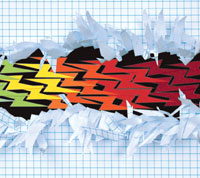 Adebisi Shank – You Me mp3