Queues are an essential part of music festivals, and Primavera would be a good choice for the queue connoiseur. After all, who doesn’t enjoy a good queue? The key would appear to be choosing one’s queue judiciously. I’ve not done so well on that front. To begin with, I queued at the wrong place for an hour to get my pass on Thursday. Then yesterday we faced a massive queue to get in to the Auditorium to see Owen Pallett. The auditorium is a very fancy purpose-built 3,200-seater concert hall. 30,000 punters into 3,200 won’t go, so the place is a nightmare to get in to. I left the Pallett queue to go get reservation tickets to guarantee entry to Low. These were only available from 4pm and of course there was a big queue. I got to the front of the queue at 5pm to be told that the people in front of us bought the final two reservation tickets. Then I got a phone call to tell me Owen Pallett had just finished. He was great, apparently.

Brimming with indignation, I queued and got in to the auditorium to see Hope Sandoval who bored the arse off me, although I was hardly in the right frame of mind. I passed by the Pitchfork stage just as Best Coast played Our Deal, which sounded lovely. At length, I got back to the auditorium halfway through Low playing The Great Destroyer in it’s entirity to a pin-drop quiet, rapt audience.I love Low, but this was particularly special. Perfect sound, and plenty of space for their harmonies to ring out. There were standing ovations between songs, and Alan Sparhawk charmed the crowd further by making the best fist so far of between-song Spanish banter. A triumph.

Beak> followed on the ATP stage: Geoff Barrow from Portishead and two blokes interchanging drums and guitar/keyboards playing motorik krautrock. The tunes built nicely, there were a few nice bits of singing, and a guitar freakout during which the guitarist’s pants fell down. The sweet harmonies on the last tune were let down a bit by some dodgy drumming, but this was a good way to spend an afternoon in the sun. Up next on the same stage were Beach House. They sounded fantastic, and lovely songs lilted by as day turned to twilight and bats flitted overhead. This was just perfect, capturing the moment and the mood. Well, almost perfect. The drummer wore a manky muscle t-shirt. They were terrific, and queue woes were forgotten. 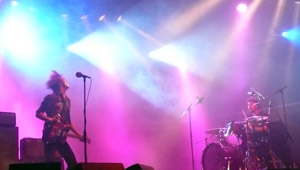 By this point Wilco were on the main stage. The crowd had grown, more than yesterday, so that it was tough to find a decent vantage point. The band veered from lovely tunes to hoary three-chord dad-rock, all given the sheen that having a half-dozen crack musicians in your band can provide. The drumming was propulsive with added percussion bits, the guitarist pulled out some fancy tapping that actually sounded as good as he thought they did. Meanwhile their polar opposite was on the Pitchfork Stage. Japandroids are two Canadians that deal in heart-on-your-sleeve chants about being young and that. “We watched Pavement last night and then got totally destroyed and ended up on the beach as the sun came up, it was one of the best nights in ages.” This was the young folk of the Logan’s Run that is the Pitchfork Stage preaching to the converted and the young folk leapt about, sang along, and stagedived. I’d had enough sloganeering at this point, and made for the Vice stage as they ended with Art Czars. 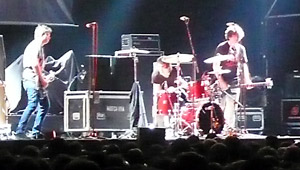 Panda Bear had a low-key opening, apologising for his visuals not working. Having been nonplussed by his recent Vicar Street gig, I didn’t have high expectations, and the crowd got restless as songs took a long time to get going and the volume seemed particularly low. After a while it did seem to come together, and as the crowd thinned, we took the chance to mooch up a bit. This turned out to be a good move. Some of the new songs from Vicar Street had been rejigged a little, some were really pretty, and the last song was slow, dubby, and beautiful. By then judgement had been passed and the Primaverans were grumbly. There were no thinning crowds at Shellac, though. The ATP stage was rammed, and they sounded far better and more vital than I expected. Dynamic, with actual tunes, I thought I smelled a whiff of classic rock that I’d never got before. In a good way, if that sounds plausible. Another score for the oldsters. 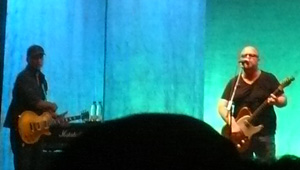 The biggest crowd was out for more oldsters as Pixies appeared on the main stage sounding impressively tight. Kim Deal, whose backing vocals were spot-on throughout, told us they’d been practicing. It sounded like it, although Black Francis did still seem like a grumpy bollocks, with the look of a man going through the motions for a good deal of the time. They played loads of Trompe Le Monde, surprisingly, and less surprisingly, the Spanish songs went down well. All eras and hits were trotted out to mass adulation by most, although during the encore of Gigantic and Where Is My Mind, a nearby skinny wolf visibly deflated with disgust. The Whelans tape has a lot to answer for.

In a final effort to avoid the queues I decided to get the last metro home at 2am. Frantic attempts were made to reach the keyholders of our apartment as the time approached, but it was to no avail. We left to get a taxi at 3.30am, were told that most taxis were out of the city due to a police convention, and gave up after walking two miles, just going to the nearest metro station for the same grim 5am train as the previous day. At least being two stops down the line meant we missed those hellish queues.