The Walkmen play Tripod on November 15th with The Flaws & Ivan St. John and we’ve some tickets to give away.

The Walkmen play Tripod on November 15th with The Flaws & Ivan St. John and we’ve some tickets to give away. 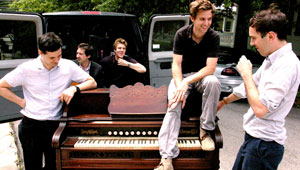 Each of the members of The Walkmen grew up in and around the Washington, DC area, played in many of the same bands from early in their careers, and even attended the same Washington-area high school. The bandmates eventually moved to Harlem and became a part of the burgeoning New York City rock scene.

The band was formed in 2000 following the breakup of two separate bands: Jonathan Fire*Eater, whose members included Martin, Maroon and Barrick, and The Recoys, whose members included Leithauser and Bauer. The three members from Jonathan Fire Eater, which had recorded for Dreamworks Records, had money left over from that past recording contract and used the remaining funds to construct a rehearsal space in uptown New York.

The newly-formed band, who wished to distance themselves from the garage rock sounds of previous bands, released a self-titled EP of songs in 2001 on Startime International, a small Brooklyn-based record label. Shortly after release of the EP, which featured an eccentric blend of upright pianos and other vintage instruments, The Walkmen made their official live debut with a performance at Joe’s Pub in the East Village.

The 2002 debut album Everyone Who Pretended to Like Me Is Gone, released by Startime, was really well received by critics.[ The album was noted for its innovative approach to atmosphere and instrumentation, with sparse bass and drums complemented by plinking piano, jangly guitars and Leithauser’s unique vocal stylings. Two of the songs on the album, “The Blizzard of ’96” and “That’s the Punchline,” were adaptations of tracks meant for The Recoys’ unreleased full-length album.

Critics compared the results of the album to past work by U2 and The Cure as a result of the uniqueness of its sound as compared to other contemporary New York City bands such as The Strokes. One of the album’s songs, “We’ve Been Had,” was featured in a commercial for a Saturn Ion automobile.

The band’s followup album, Bows + Arrows, was released on the Record Collection label in 2004 and was listed by many critics as one of the year’s best albums. The album spawned singles for the songs “The Rat” and “Little House of Savages.” Critical success of the album led the band to perform on the popular Fox series The O.C. Bows + Arrows was noted for containing a more immediate and focused sound than its predecessor; both “The Rat” and “Little House of Savages” were seen as stark contrasts to much of the band’s past outputs.

Their next album, A Hundred Miles Off, was released in the U.S. on May 23, 2006. The band premiered most of the new songs on a tour of the Northeast in early 2006. The first single to be released was “Louisiana,” which featured an upbeat chorus of horns. Peter Bauer and Walter Martin traded musical instruments on the new album, with Bauer handling the organ duties and Martin playing bass. The album found the band refocusing its sound toward folk sounds, unlike their previous two albums; though the change in direction was lauded by some critics, other reviews were often mixed.

The band was forced to close Marcata Studios that same year after Columbia University purchased the building it resided in. The band released another full-length album, “Pussy Cats” Starring the Walkmen, a track-by-track cover of Harry Nilsson and John Lennon’s 1974 album Pussy Cats, as a farewell to their studio’s Harlem location.

Their next studio album, You & Me, became available on July 29, 2008, as an exclusive charitable pre-release on indie music website Amie Street. The Walkmen made the album available for $5 on Amie Street, with all proceeds donated to the Memorial Sloan-Kettering Cancer Center. During its first week of sales, the album charted at #29 on Billboard’s Top Digital Albums. The album was made available on physical formats on August 19, 2008. The album was recorded at Gigantic Studios with Chris Zane.

The Walkmen recorded 13 songs for their upcoming album in five days in August 2009 with John Congleton and Chris Zane. They had been playing several of the songs since the summer of 2009. They will be releasing the album on Fat Possum Records. They recorded “something like 28 songs,” but included only 11 on the album. In support of the new album, The Walkmen performed at All Tomorrow Parties in May 2010, Lollapalooza in early August 2010, and the Reading and Leeds Festivals at the end of August 2010. On June 16, it was announced on Pitchfork Media that their new album, now officially named Lisbon, will be released on September 14.

So if you fancy getting your hands on a pair of tickets just email your name & thumped.com username to [email protected] with THEWALKMENTICKETSPLEASE as the subject line by midnight on Thursday 11th November.