No Spill Blood play Whelan’s on Saturday with Melodica Deathship & Zom, ahead of month long European tour in April with Fang Island.

No Spill Blood
Matt Hedigan (Hands Up Who Wants To Die?, Elk) on bass and vocals, Ruadhan O’Meara (Magic Pockets) on synths and Lar Kaye (Adebisi Shank) on drums took time out of their other bands to jam in Dublin in early 2011 after Matt had moved to the city from Cork. The trio’s shared musical influences, the agile post-rock electronic punch of Trans Am, the playful noise of Devo and the low-down post-punk of the Melvins can be heard melded into No Spill Blood’s spirited hurtling rhythms.
While their other musical projects contribute to the tempos, the tones and the textures of the music, No Spill Blood’s sound is unequivocally their own. Repetitive Kraut-esque rhythms are goaded by O’Meara’s buzzsaw vintage synthesizers, Kaye swaps his robotic guitar work in Adebisi Shank for incisively-charged drums and Hedigan provides the fuzzed-out low-end and beastly vocals. Or in their own words – “Heft, Heft, Synth, Heft, Heft”.

No Spill Blood will be kicking off an epic European tour with Sargent House labelmates Fang Island in April: 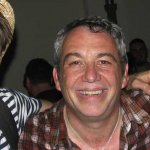