Ian Maleney spoke with Barry O’Brien of Seeping Into Cinemas about his upcoming debut album, 100,000 Times.

Seeping Into Cinemas is the solo project of Dublin musician, Barry O’Brien who releases his debut LP on June 17th. An uplifting yet low-key affair, it is filled with a particular warmth and quiet ambition with O’Brien’s multi-layered vocals bringing to mind Elliot Smith’s whispered confessionals. O’Brien recently let us in on the Seeping Into Cinemas story over a cup of coffee.

Can you tell me a little about how Seeping Into Cinemas came into being?
Started out a few years ago I guess. I had been in other bands, always with other people which had generally been kind of loud and I really wanted to do something quiet. So I started writing quiet songs and putting round four tracks and eight-tracks, then I got really, really into recording and totally felt that that really complemented the songs. They really went hand in hand. Got more and more into the recording, got more into getting more gear, becoming a nerd about it and I just recorded the album that way. I was always writing and re-writing. That’s about it really, I didn’t do a lot of gigs. Did a few solo gigs here and there and I did one last year when I released a single last year. Other than that it was just recording.

How long has the whole process taken so far?
It’s been a good solid year of pretty hard core work on it. I’ve been fiddling around with things for a while before that but really just a solid year of hard work of writing and recording.

How have things been developing on the gig front?
So far there’s only been one full band gig. That as a few weeks ago in Shebeen Chic, for the Popicalia gig. That was really good. It was cool to play the songs that way. When I started this record, I wanted it to be really quiet and stripped back, and it still is quiet and stripped back but it has ended up having two or three guitars and keys and drums and whatnot so you need a full band to play the record live. The songs work, or I think they work anyway, just solo or with a combination of guitar and drums and voice or something. The band are just friends who are helping out and they’re not always going to be around so a lot of times it’ll be just me.

Do you find it important to be able to play with the songs and the arrangements like that?
I don’t think there’s any real definitive, finished version of a song. Obviously making an album, that version is going to be a definite version and that’s cool when you get that down and it’s as close as it can be to what it could be. At the end of the day, you could be able to play a song on any instrument. It could be just those words, that melody and you could be able to carry it on any basic instrument. It’s fun to play around the arrangements and I have the freedom to do that with the band so that’s cool.

The lyrics seem to be quite personal?
I try to be cryptic, but maybe I’m not! They’re not necessarily all auto-biographical though some of them are. I really just try to set a mood, find something to fit with the music. I’d say that’s as important as the actual lyrics, though I do really love words. I concentrate on the mood, trying to create a certain atmosphere, like they’re times certain words that even the sound of them will complement a certain mood. More often than not, the music will set that mood first but then the lyrics need to work with that.

And do you start with music or lyrics when you’re writing?
It’s always the music. But sometimes you’ll get a line and maybe you’ll come back to that later. You’ll be playing and then be like, oh what was that line? And you’ll root it out and use it but generally it’s music first.

Did you look into working with other labels?
No, I’m kind of stubborn in that way. With recording it, I kind of felt like, I’m doing all this. I didn’t mix it though.

You got Steve Shannon in for that part of it, right?
Yeah, he was great. It was great to get a second pair of ears on it because I hadn’t really let anyone listen to it. Like, the drummer who played drums on it, maybe my mum and a few friends but other than that I’d be like, oh no, it’s not done. But he was so good, just getting a second opinion on it. He only works with things he connects with and he did a really good job on this. It went really quickly, I had tried the mixes myself and I was getting really bogged down, finding it really hard to make definitive decisions, but Steve mixed it in like less than two weeks and it was very good. For me anyway, I had lost perspective at that stage. Some people can do it I’m sure, but you make so many decisions in the creative process that it just felt better to get someone else in on it at that point.

Do you see yourself fitting in with the Irish music scene at the moment?
I’m just another indie guy, putting out stuff I suppose! Obviously I’d love to be doing this for a living and all that but I’ve been making music for quite a while now and it’s never been that. I’ll never stop doing it because people who want to make a living from this or get famous or whatever, if that doesn’t happen I think they’ll general give it up and move on but I’ll always make music. Like, I racked up some debts making this album and hopefully I’ll be able to pay those back. I just want to make records so if I break even I’ll be happy you know?

What are your plans for the summer after the album comes out?
I’ve been trying to get some festival slots. No luck so far on that front, but I probably left that far too late anyway. Trying to get gigs in Galway and Cork and things. Got a Belfast gig coming up, so I’m just trying to get around the country.

Anything on an international level?
Yeah, if it becomes an option I’ll definitely do it. I’ll certainly try to get the album out physically in the UK and see what happens there. Maybe try and get to CMJ. I should probably be looking into that pretty soon actually.

What are the plans for the physical product?
It’ll be on CD. I would’ve liked to do vinyl but you know, costs. It looks really nice, I’m really happy with it. It’s a digipack, it’s really pretty. Bennie Reilly did all the artwork and the layout and stuff, she’s a really good artist and she’s in a band called Little X’s for Eyes. I’m really happy how it all turned out. If it does well, maybe I could put it on vinyl but we’ll see how it goes.

Seeping Into Cinemas‘ debut album 100,000 Times will be launched on 16th June at The Odessa Club, with support from Sacred Animals, and a Tower Records instore gig is lined up for June 17th. 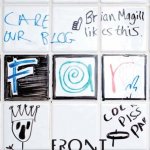 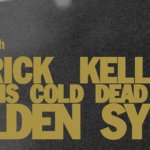