The first Foggy Jam all-dayer is on Sunday October 10th & we’ve got some free tickets for you.

The first Foggy Jam all-dayer is on Sunday October 10th. No Age, Mice Parade, Male Bonding, Silje Nes, Squarehead & Hipster Youth are all playing & we’ve got some free tickets for you.

We are delighted to announce the first of our new all-day series, Foggy Jam: an opportunity to catch seven wonderful live artists in one day for a budget ticket price. Heading the bill is L.A.’s NO AGE, one of the most exciting modern noise-pop bands in the world right now who release their new Sub Pop album Everything in Between in late September (more info below).

MICE PARADE is the work of New York’s Adam Pierce and a rotating ensemble of musicians. Their incredible back catalogue tackles all sorts of musical crossover with folk styles, electronics, Krautrock, Eno inspired minimalism and Loveless-era MBV. The new album What It Means to be Left-Handed soaks up West African Highlife, Flamenco, Brazillian Jazz, and even 80’s indie-rock (More info below). 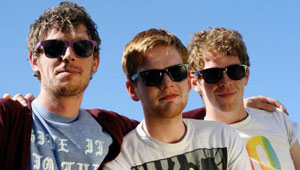 Also joining the line-up is new Sub Pop signings MALE BONDING, a London trio whose debut album Nothing Hurts is jam-packed with messy vintage 90s noise-pop. And SILJE NES, a Norwegian singer-songwriter and Mice Parade’s Fatcat labelmate whose beautiful layered recordings full of strings and woodwind are joys to behold.

For Foggy Jam’s Irish representation we’ve picked two of current favourites. Fake Blood is the debut seven inch release by SQUAREHEAD the single of the year so far for us – Kurt Cobain meets the Everly Brothers, slacker-rock meets doo-wop, just pure pop all the way really. And HIPSTER YOUTH is revelatory stuff. A Dublin teenager whose Teenage Elders album makes 8-bit electronic music that is beautiful and poignant.

If you’d like to get your hands on a couple of tickets just email [email protected] with Foggy Jam Tickets as the subject & including both your thumped username & your real name. Get your entries in by Wednesday 6th October & winners will be notified by email on Thursday October 7th.