WHY? - V. I want to live with conviction, in silence and diction. (Joyful Noise Recordings) (1 Viewer) 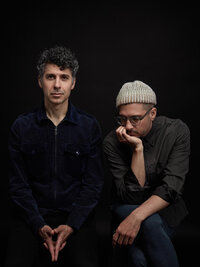 "V. I WANT TO LIVE WITH CONVICTION, IN SILENCE AND DICTION."
THREE-SONG MOVEMENT WITH ACCOMPANYING VISUAL STARRING TATIANA MASLANY AND DIRECTED BY MILES JORIS-PEYRAFITTE AND JAMES SIEWERT


WHY?, the creative moniker for consummate wordsmith and beloved songwriter Yoni Wolf, is excited to announce AOKOHIO, a visual album to be released on August 9, 2019 via Joyful Noise Recordings. Today, WHY? is sharing the album's fifth three-song movement and accompanying visual, "V. I want to live with conviction, in silence and diction." The album's entire visual element stars Emmy-winning actress Tatiana Maslany (Orphan Black) and was directed by Sundance Dramatic Special Jury Award-winner Miles Joris-Peyrafitte and James Siewert. Stream or embed the video HERE.

The lead-up to AOKOHIO will follow the somewhat unconventional path of gradually revealing the entire album in playing sequence, each movement accompanied by its own visual element, from now until its August 9 release date. The visual component of the album is anchored by a continuing narrative, which will continue to take shape until the album is released.

AOKOHIO's themes of familial anxieties and nostalgia will be familiar to many, but few have attempted as clear-eyed and sincere a portrayal as Wolf has succeeded with here. Collaborators like Lala Lala's Lillie West and both members of Sylvan Esso will no doubt come as welcome additions, both serving to bolster the unmistakable sound and vision on which WHY? has grown its legions of fans.

Alongside their Autumn US tour, WHY? has also announced a run of UK/EU headline tour dates, beginning on October 23 in Glasgow at Stereo and concluding on Nov 6 in Copenhagen, Denmark at Vega. Full dates are as follows:

Yoni Wolf has spent the last two decades traveling the remote sonic terrain where hip-hop, rock, and electronic music meet. In that time he’s cultivated a unique sound, and a unique position as one of contemporary music’s most distinctive voices. Some of Yoni’s most compelling and critically-praised musical experiments have been issued under the moniker WHY? and his latest entry is no exception. On AOKOHIO Yoni condenses the essential elements of WHY? into astunningly potent musical vision.

Co-produced by Yoni and his brother Josiah, AOKOHIO presents a rich palette of musical voices that emerge and disappear into a constantly shifting kaleidoscope of sound. “I wanted a wide variety of sounds. I didn't want this album to sit in one sonic zone. I've always felt like too jagged of a person to be smooth in that way,” Yoni says. While the album features many notable guest contributors, from Lala Lala’s Lillie West, to Nick Sanborn and Amelia Meath of Sylvan Esso, the listener’s attention remains squarely directed on Yoni’s voice and vision. AOKOHIO finds Yoni rethinking fundamental aspects of his approach to creating and delivering his music. The album is presented as six movements comprised of two to four songs each, with some segments appearing as brief fragments that dissolve within seconds.

“When I started this project, I decided I needed to try a new approach in creating music and how I work,” Yoni reflects. “I wasn't feeling the idea of going back in and making another ten or twelve song album. It felt arduous. It felt like too much. So I wanted to pare the process down and make it manageable. I thought, 'Why don't I make small five or six minute movements and finish up each movement before I move on to the next.' That's how I started approaching it. The whole process took over five years, I'd start working on something and set it aside for awhile. The earliest songs on this album started in 2013.“

As Yoni reimagined his approach to creating music, he also began thinking of new ways to share the music with his audience. “I initially wanted to release the music as I progressed through the project,” Yoni says. “When I finished a movement I wanted to put it up digitally on Bandcamp or Soundcloud. I just wanted to make little pieces of music and put them out there. But I had a call with my manager and the label and they said, 'We can release stuff through time like that, but we want to do it properly.' So the idea of the project changed after that, but it retained the integrity of working in movements. It's definitely a very different way of working for me. I think it has yielded some interesting results.”

The concept of sharing AOKOHIO in segments over time has been preserved with the release of an accompanying visual album. “I think it's a very artful way of putting the the music out there,” Yoni explains. “It's like a television series, it's revealing itself slowly over time. I think it's cool that the audience gets to hear it one piece at a time, and has to wait and digest each piece before they get the next one.”

“I knew early on that I wanted that visual element for this album,” Yoni recalls. “My brother and I have worked on video stuff our whole lives. Our dad had video equipment since we were little kids, he had an editing suite in our basement. We weren't rich, we were actually very poor, but somehow he'd gotten ahold of these video editing desks and cameras. Even though my brother and I had dabbled in video as kids, it's not what we do for a living. So we wanted to find someone, and fucking randomly a guy messaged me on Instagram and was like, 'Hey, I like your music and I'd love to work with you.' I looked at his work and I was like, 'This guy is for real!'"

The author of that fateful Instagram message was Sundance award-winning director Miles Joris-Peyrafitte. “Miles directed the first three segments of the visual album and is the mastermind of the overarching video project,” Yoni explains. Joris-Peyrafitte’s visuals cut contemporary footage of Yoni and actress Tatiana Maslany with vintage home videos documenting Yoni’s childhood life in Cincinnati. It’s a fitting juxtaposition, as Yoni’s lyrics on AOKOHIO seem to question how memory, history, and place shape our anxieties and sense of self. “I moved back to Cincinnati after living in the Bay Area for over a decade,” Yoni says. “This album is very much me thinking about my mom and dad, and my siblings.”

Yoni’s return to his Ohio hometown brought on a period of critical self-reflection. “Is there a word for bad nostalgia?” Yoni asks. “When I think of the word nostalgia, it seems like pleasant feelings and all that, but this is not really like that. It's more about reflecting on the anxieties I've had since I was born. Why are they there? Is this epigenetics? Is that shit just inside of me because of the Holocaust and my relatives back then? What am I really? Why do I operate in these ways?”

Ultimately AOKOHIO sees Yoni pushing to find meaning and peace of mind in the moment, even if it’s not exactly where he wants to be. “The title is sarcastic I guess,” Yoni offers. “But it's also wishful. A lot of my album titles have been names of maladies, like Alopecia and Mumps, Etc. I don't want to project that into the world. You know, ‘A-OK Ohio, I'm here and it's fine.’ It's like a mantra, ‘A-OK Ohio, I'm here and it's OK.’ Even though in reality, everyday I'm like, 'I've got to get the hell out of Ohio.'"

AOKOHIO feels like a consequential addition to the WHY? catalog, possibly even an artistic turning point. But its creator remains circumspect when asked to comment on the album’s significance within his discography, instead preferring to characterize the work as the latest iteration of his deep commitment to his artistic practice. “I have no idea if this record is good or not,” Yoni says. “But I never really know. I know that I've never written a song that's indispensable to the American songbook. But in terms of what it is, it's a piece of art. I put blood, sweat, and tears into this album, and struggled through the creative process as I always do. As far as where this sits with the rest of my albums? I can't answer that. I just know that my career is a lifelong career, and I’m working it. Every time it feels right, it makes me feel good.”

IV: The surgeon nervously goes on, he never claimed to be God.
11. Narcissistic Lamentation
12. Krevin’
13. The Crippled Physician
14. Ustekinumab