What movie did you watch last night? (4 Viewers)

pete said:
i think the big one was the distances between various objects in orbit being *ridiculously* way too low. 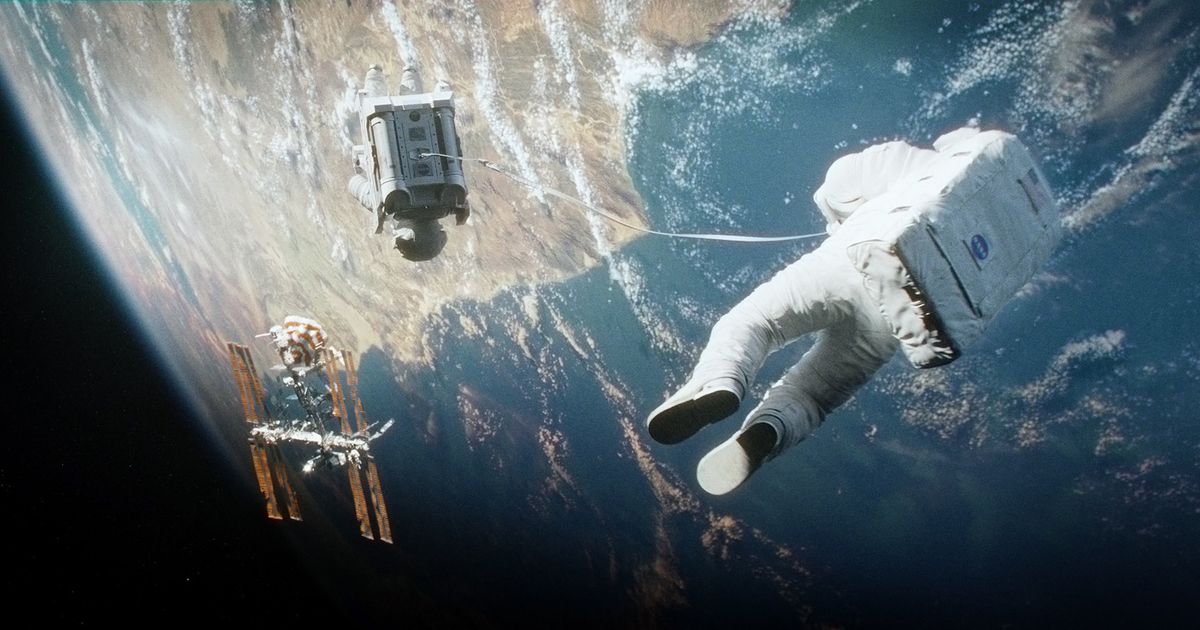 Jet packs, space nausea (what happens if you vomit in your suit?), and the unlikelihood of being able to dodge space debris.

Also the fact that at the actual end of the film

where she's having been in space for weeks or months or whatever, she crash lands in a lake but is able to swim to shore no problem. You ever see astronauts coming back from space after a few weeks? They're fuckin bolloxed in 1G gravity again. Basically, she drowned at the end.

pete said:
Ah I loved it meself. saw it in IMAX 3D I think. Very nice.
Click to expand...

i saw it in imax 3d too at the time when it came out. blew me away. the only time i felt that the 3d effect was of any use whatsoever, and in this case it really added to it. i agree that george clooney took away from it a bit, but otherwise i was sitting there, terrified throughout.

i watched kung fu hustle last night with my kids. we all had a great laugh. they loved it. cracking movie

Gravity did look great, but I did fucking hate it for the most part.

Tonight I saw "Old" by M. Shite Nyalaman. Fairly entertaining nonsense really, it's a decent enough suspense thriller kind of thing. There's some great camerawork throughout the whole thing, so it's actually fairly well done for a silly film that has a fair amount in common with the 'Lost' tv show.

There was a lot of fair in that. Fair.

The Mandela Effect. Man goes into conspiracy theory spiral after the death of his daughter and starts questioning reality. Not the worst film I've ever seen, not the best, but obviously made on a small enough budget and I think with a bit more money they could have made a much better film. Could have done with being slightly longer too. Oh and don't watch the trailer (or even the trailer thumbnail ffs) if you plan on ever seeing this movie.

Did they free him in the end?

Gravity was great on the big screen. Found it unwatchable on the second viewing when you actually paid attention.

Watched the Equalizer a few nights ago. On the one hand, harmless stuff with some decent kills. Don't mess with us fat American middle aged lads. On the other hand, pitiful.

I watched Silence of the Lambs (good), Red Dragon (ok) and Hannibal (crap).

Lili Marlene said:
Been continuing with the Disney films:

Fun and Fancy Free - a weird pointless reprise from Jiminy Cricket but the two stories are decent enough. Bongo the bear and Mickey and the Beanstalk.

The Adventures of Ichabod and Mr. Toad - Meh, alright. Some interesting stuff but not especially enjoyable. The Sleepy Hollow story is pure sex-creep when seen through modern eyes, the Wind in the Willows section is average, makes Rat really posh for no good reason.

Cinderella - noticeably modern compared to what came before, I saw this one a million times as a kid but it holds up well. I don't really have a lot to say about it aside from it clearly sets the template for what Disney would be doing in the future way more than Snow White. I like.

Alice in Wonderland - I mean it looks good but this book never really translates well onto the screen as you have to lose 90% of what makes it a decent book in favor of just the madcap story. I will say it's not bad but I was disappointed.

Peter Pan - bad. Peter Pan's just a dick and it's never explained why anyone could possibly like him. Loses all the psychology of the book and the racism is hard to overlook in this one.

Lady & the Tramp - I hadn't seen this in many years and its great! Aside from terrible stereotypes (Italian and Irish) and some straight up racism via the siamese cats, this holds up well. A noticeable improvement in the animation as well (apparently something to do with "Cinemascope" but it just felt richer than the previous few films to me, maybe the best since Pinocchio). The dog pound section is a highlight.

Sleeping Beauty - ah this one was fantastic. The visuals are amazing, right up there with Snow White when it comes to creating a world. The Prince and Princess are fairly cardboard cutout (although the Prince gets a bit more of a personality with his back and forth with his horse) so it's mostly the story of the three good witches vs. Maleficent. You can kind of see how Disney has gone from trying to present animation as art to a commercial juggernaut watching its bottom line at this point though.
Click to expand...

One Hundred and One Dalmatians: I had a memory of this being underwhelming due to the lack of tunes in it but no, absolutely classic. Cruella De Vil rules and needs no backstory. Amazing animation style.

The Sword in the Stone: Rubbish. Tries to have fun with various side characters and sometimes succeeds but it can't get around the weakness of the story.

The Aristocats - i.e. "Make us a film that combines One Hundred and One Dalmatians and the Lady and the Tramp but is slightly different." It works despite the flaws though, and if you can get ignore the unnecessary racism the jazz cat gang are pretty damn cool.

Robin Hood - I remember this being the only Disney film that used to be on tv a lot when I was a kid? It holds up pretty well, it's fun spotting all the recycled animation bits.

The Many Adventures of Winnie the Pooh - ah yeah, not bad. It doesn't really capture the books in all honesty but it's a nice, gentle watch for young kids i'd imagine.

The Rescuers - Forgot this one existed, a little weird advert for the United Nations? It's funny watching it now when no one trusts any international organizations. The story is a bit slight but the performances and animation style are strong.

The Fox and the Hound - aka toxic masculinity, rewarded! I loved this as a kid and it's still pretty good but, jesus, Amos Slade needs to get some comeuppance already. The message of the film is fairly unique in Disney I think? Society defines you, and there's nothing you can do to change that. The fairly explicit racial analogy is very interesting.

The Black Cauldron - I really wanted to like this, famously Disney goes 'dark,' but the plot barely holds together. It's the kind of thing you'd need to do for a whole series these days. Some great visuals in there at least, heavily borrowing from Sleeping Beauty.

It's fuckin definitely the children that are wrong with that shit

Cormcolash said:
It's fuckin definitely the children that are wrong with that shit
Click to expand...

you mean the adults that still think they're children.

Saw your earlier post about Black Widow. Watched this a few months back: 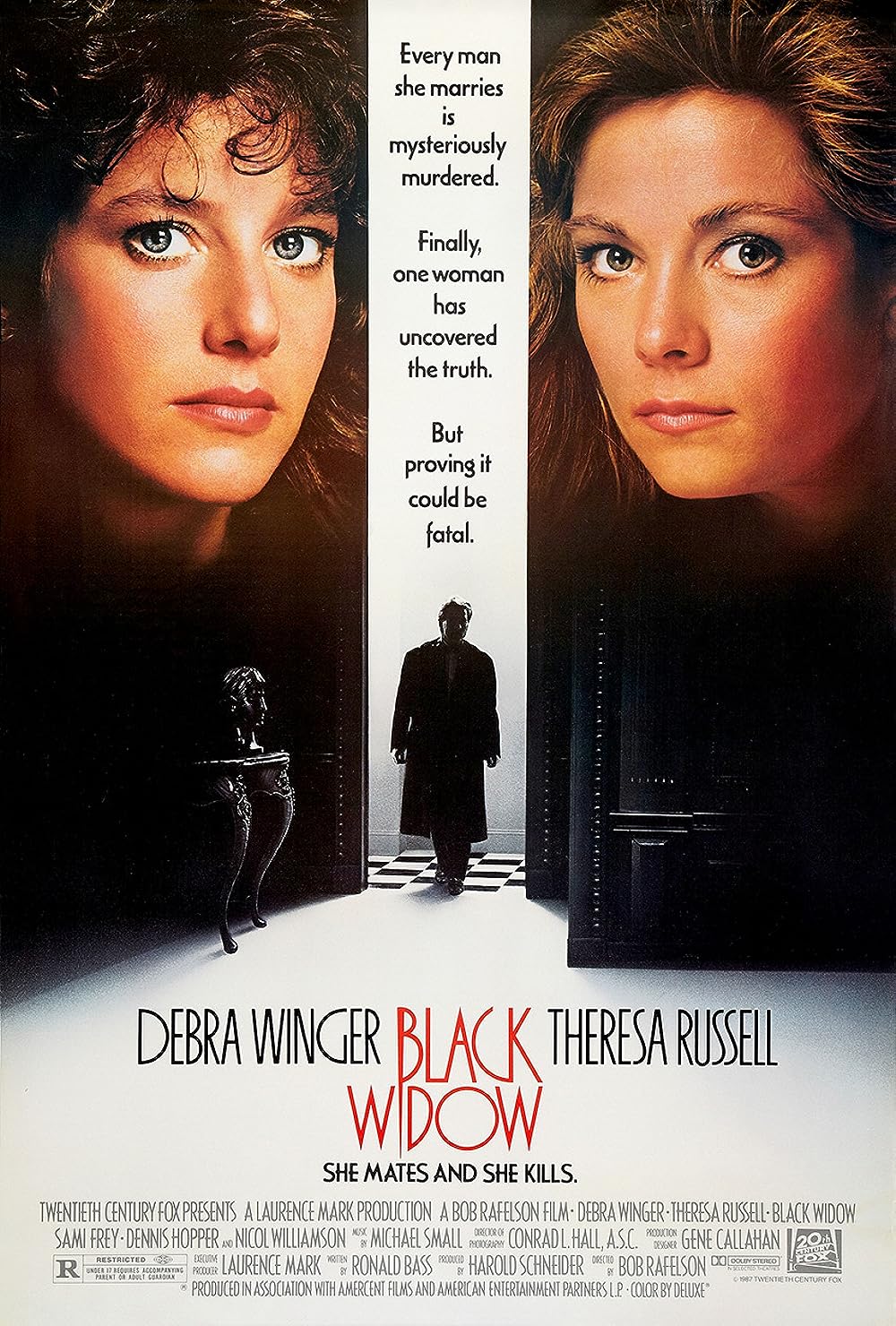 Black Widow: Directed by Bob Rafelson. With Debra Winger, Theresa Russell, Sami Frey, Dennis Hopper. A federal investigator tracks down a gold-digging woman who moves from husband to husband to kill them and collect the inheritance.

Put a cast-iron dampener over your mid-section that's all I'll say... actually a very good ambient, erotic thriller. I feel like Russell pushes Debra Winger to a better performance than you'd expect. Theresa Russell in the 80s, bucket of cold water please quick. Bob Rafelson directs gamely from the existentialist wilderness of his career. Underrated. Rewatched Five Easy Pieces last week too... popped into my head when I was clipping some hedges on a dour Saturday evening fit for Loftus Road disappointment wondering what the fuck I was doing with my life. Weird flick to go back to when you're older.

It's got Dennis Hopper, how could it go wrong?

Cormcolash said:
It's got Dennis Hopper, how could it go wrong?
Click to expand...

That was one of the reasons I popped my cork of Champagne before sticking it on... alas, the third lead on imdb is misleading. He sleepwalks through one memorable scene... even DH sleepwalking is better than most.

Definitely under-rated, and should be the Black Widow everyone is talking about.
New posts