prefuse said:
I watched England is mine. It's a Morrissey biopic about the years before the smiths. It was okay. A lot of naval gazing but I kind of liked the stillness of parts of it. Trying to portray the bleak empty hours & depression. The film looked good
Click to expand...

Yeah wasn’t as bad as I thought it would be.

Deliberately avoided that and watched 'OUTRAGE' instead, some made for TV shite on the other channel about these college kids that start a vendetta against this guy and his wife. Total shite, at least the music was kind of hilarious, shit midi classic.
T

egg_ said:
I watched Charade with Audrey Hepburn and Cary Grant. It was good, there were scenes in it I remembered from watching it as a kid. Good fuck Audrey Hepburn was a fine thing
Click to expand...

Audrey Hepburn and Cary Grant! I had never heard of this movie until Fantomas covered the song on the Director's Cut album, and I just assumed it was a creepy scary horror that I should avoid.

I watched Rise of the Skywalker the other night and I was offended at how badly made it was. It was just a bunch of cutscenes, some of which were undeniably well realised, but no story, lots of reference to random Star Wars mythos bullshit and far too many characters to tell a decent, vaguely coherent story.

Was lovely seeing Landold and the beautiful space horse woman was undeniably beautiful and Oscar Isaac and John Boyega have genuine chemistry but that pointless and disappointing no homoing of the Poe Dameron character was pathetic. The other two weren't masterpieces but this was a worse film in most ways than even Attack Of The Clones, which for all its corniness, tries at least to tell a story.

By blockbuster standards, it really deserves to be ranked alongside stuff like Suicide Squad as the absolute shite that it is.

Blind Chance. another brilliant movie by Krzysztof Kieslowski. Have yet to watch something by this guy that I didn't love. Love the artwork for the movie also 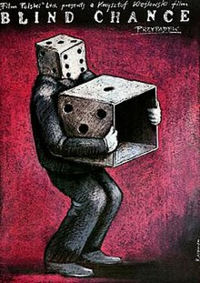 I sort of liked it. Interesting premise that didn’t quite deliver.

Thought it was amusing enough nonsense and also Anne Hathaway

hermie said:
Leave No Trace. It was good. Interesting story that could lend itself to a longer treatment. Could make a great TV show. It's the woman who did Winter's Bone. Not quite as good as that but well worth a watch.
Click to expand...

Watched this tonight. Really liked it.

First half of Southland Tales. Better than expected

I thought it was very good.

Haven't seen winter's bone in such a long time. That film got me into Daniel woodrell's novels

Good Time - finally caught up with this. Even more stressful than Uncut Gems. Very good.

Agreed on all. Monos was brilliant.

The Vast Of Night

Really really good super low budget science fiction movie set in a 1950s American small town. Has a rather impressive tracking shot in the middle of the movie too, which is always nice.