What gig did you go to last night? (2 Viewers)

Unicron said:
You were pointed out to me as I left as a thumped person, and I now believe that we've met before. I think we had a mutual friend, FD, sitting between us at Stars Of The Lid.
Click to expand...

Yes, that would be me. Good to know in future.
T

Unicron said:
Low in Christchurch. Very good, wasn't mad on their selection of non-Christmas songs in the encore though
Click to expand...

Very same set the next night too, but I was alright with that, happy with their picks.

"H Natural" in the Grand Social last night. What the fuck is a h natural? Well it the ridiculous name that Steve Hogarth (the lead singer of Marillion) uses when he does his solo gigs. One man and his piano making up a set list as he goes, playing whatever he feels like, working out covers as he's playing them. It's a massively self indulgent show but it has its moments. Not comparable to a full Marillion gig in any way at all.

I think they were shattered cos Dudley took Sparhawk out for a long run around Phoenix Park and broke him.


scutter said:
They looked a bit shattered though. They've been travelling for the last 3 weeks so that's understandable.
Click to expand...

old said:
I think they were shattered cos Dudley took Sparhawk out for a long run around Phoenix Park and broke him.
Click to expand...

Heh. I got a message from Alan on Saturday, he was still hurtin'....

dudley said:
Heh. I got a message from Alan on Saturday, he was still hurtin'....
Click to expand...

Went to Sabbath on Friday night. Many orders of magnitude better than I expected it to be, and my hopes were high enough. Such a sound crowd as well, really great atmosphere in there. Can only imagine what the final gigs in Brum will be like...

Too many drunken arseholes at it, but it didn't stop me from enjoying it a lot.

Too many drunken arseholes at it, but it didn't stop me from enjoying it a lot.
Click to expand...

galway was great too. stratocastic?

Went to see Tommy Tiernan last night in vicar st. First time seeing him or even the first time listening to him for longer than 10 minutes. Really fucking funny in places, broad and boring in others. A good night.

Saw Pat McManus in Navan again last night. Probably about my sixth time. He usually does Fridays but this was the first Saturday show and it was very different. Bigger crowd, lots of nutters. Pat was on fire.

Was at frightened rabbit on Thursday in the spirit store in dundalk. Good gig, enjoyable. Support was from eve belle, who I also liked.

Also was at Joseph in Whelan's on Friday, that was good too.

went to see erik friedlander's oscalypso quartet in the kevin barry room at n.c.h. last night. love friedlander's solo recordings but i'm so-so on his small group stuff. this was a band dedicated to the music of oscar pettiford, a bassist/cellist and one of the founding fathers of bebop who, to my shame, i had never heard of despite him having played with duke ellington, dizzy gillespie, thelonius monk, sonny rollins - anyone who was anyone in 40s/50s jazz. he was the first to use the cello (tuned like a bass) in a jazz context (while he had broken his arm so couldn't play bass), so is a natural inspiration for friedlander.

the band was made up of michael blake on tenor, trevor dunn on double bass and michael sarin on drums and cymbals, with friedlander playing cello throughout, mostly pizzicato. blake was a new name to me and something of an unknown quantity and i'm wary of saxophonists in general but he was the antithesis of the egotistic bleaters i run a mile from, with a breathy, demure tone well suited to the music which was almost chamber-jazz. great to finally see dunn in the flesh and he has a telepathic understanding with friedlander. i'd seen sarin (pronounced "sah-reen", we learnt, undermining my jokes about him having "some nerve" and being a "gas man") before and, true to form, he added some much-needed percussive friction in parts, ensuring this wasn't just a set of slavish covers but more of a contemporary take on bebop.

a couple of pettiford-inspired friedlander originals also helped, notably "o.p. meets fela", a piece which imagined an improbable (because o.p. died in 1960) meeting between pettiford and kuti, which gave blake the chance to put his chops on show, pitted against sarin's best tony allen impersonation. a real highlight of the night.

the n.c.h. needs to do something about the presentation of small group music in the kevin barry room though. there were no floor lights and no gels, meaning the band was lit from above and behind by stark white light. you don't really appreciate the quality of a good lighting job until you see the opposite - a harsh, static flood more suited to the lab than the stage. points docked for that. otherwise my modest pre-show expectations were easily exceeded.

Unknown Convict said:
i had never heard of despite him having played with duke ellington, dizzy gillespie, thelonius monk, sonny rollins
Click to expand...

just in from a gig in a warehouse/punk house in the middle of this heatwave, which was very gross and sweaty 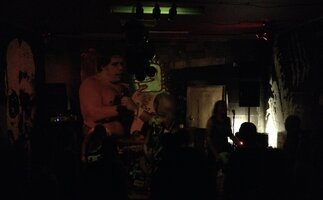 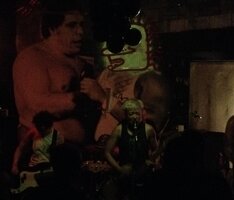 it's a great venue too, one of those places that has a good atmosphere and has just right the right level of space and darkness to hide in
(and also has a row of crates to sit down on at the back of the gig room that are always free because most people there are in their early 20s and can stand up for 20 minutes without getting tired)
New posts

New albums worth listening to
2