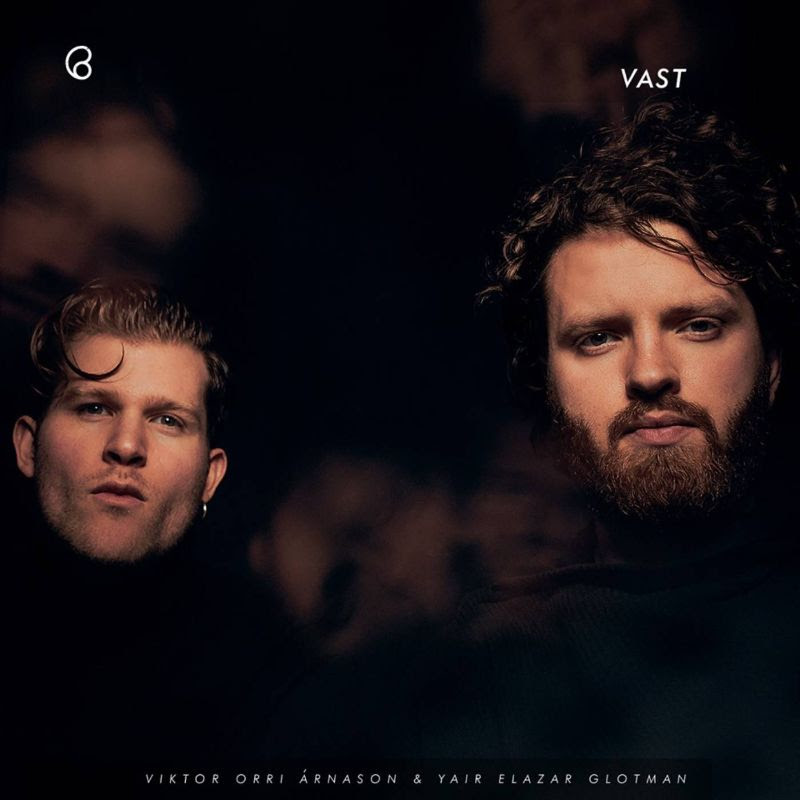 Listen to LIFE, the first insight in to the new record, streaming today via bandcamp

VAST is as much an exploration of sound as it is a faithful reproduction of a specific performance. From the scrapes and rattles that precede the booming sub bass of album opener “Eruption” until forlorn closing track “Hljóð” grinds itself to a halt, the album bristles with the lesser-heard sounds of stringed instruments: Screeches of flesh on steel and the otherwise-muted buzzings of wooden bridges permeate – and at times overwhelm – the more conventionally captured sounds that carry the bulk of VAST’s emotional weight.

Prior to the album’s recording, Viktor and Yair had not met in person, though both contributed to the late Jóhann Jóhannsson's 2017 remix of “Solari” for Ryuichi Sakamoto. It was at the encouragement of the former that they decided to finally meet and play together.

Setting up at two ends of Viktor’s Kreuzberg studio, and separated only by an array of carefully positioned microphones, the two artists set out with no fixed aim beyond feeding off of each other’s creative energies and recording the results. By monitoring their effected performances through headphones in real time, the pair were able to isolate and respond to both the subtle nuances of each other’s playing and specific details of each instrument’s sound. It’s this process of reactive improvisation that led to the unorthodox arrangements and unique timbres of VAST.

The resulting audio was cut into five tracks and mixed predominantly by Yair and Viktor in Berlin. Additional mixing, along with the album’s mastering, was completed by Valgeir Sigurðsson at Greenhouse Recording Studios, Iceland.

"I’m happy and excited to invite Viktor and Yair into the fold of the Bedroom Community as we, on our HVALREKI series, release what is essentially the result of their very first collaboration. VAST elegantly captures the spirit of a first time meeting between musicians who are very well aware of their own capacity, but are at the same time wandering through the unexpected and responding to what the other person has to offer in that collaborative space. The result is intimate, moving, and at the same time more expansive than the forces would suggest." - Valgeir Sigurðsson

About Viktor Orri Árnason
Viktor Orri Árnason is an Icelandic composer and conductor. His particular focus on colliding the worlds of classical composition and studio artistry has – along with his unique approach to the viola and violin – made him a sought after collaborator for established musicians of many genres.
Viktor is a member of the award-winning band Hjaltalín, and has played the strings and created arrangements for Jóhann Jóhannsson, Hildur Guðnadóttir, Ólafur Arnalds, Nils Frahm, Ryuichi Sakamoto, Of Monsters and Men, Agent Fresco, Bang Gang, President Bongo, Árstíðir, Sandra Kolstad, and East Of My Youth, among many others. His contributions can be heard in the soundtracks of countless movies and TV series, like the BAFTA award–winning Broadchurch and Asia Pacific Screen Awards –winner Mary Magdalene.
Website: https://www.viktorarnason.com/
Facebook: https://www.facebook.com/viktororriarnason/
Instagram: https://www.instagram.com/viktorarnason/

About Yair Elazar Glotman
Yair Elazar Glotman is a composer, musician, and sound artist living and working in Berlin with a focus on electroacoustic composition and sound installations. His musical background includes training in classical double-bass, electroacoustic composition, and art and media studies. As a result, his work is influenced by both acoustic and electronic traditions. He music achieves textural and spatial complexity through acoustic instrumentation, analog tape processing, and electronics.
In recent years, Glotman has worked as a composer for film, including for the influential, late composer Jóhann Jóhannsson among others. He has also recently designed the soundtrack for the Royal Opera House in London. Glotman has released music under his own name, as well as under that of various other projects and collaborations, including KETEV and Blessed Initiative. He maintains an ongoing collaboration with the Swedish Composer Mats Erlandsson.

Bedroom Community Records
“Bedroom Community is an Icelandic record label/collective formed in 2006 by Valgeir Sigurðsson, with Nico Muhly and Ben Frost, later adding Sam Amidon, Daníel Bjarnason, Puzzle Muteson, Paul Corley, Nadia Sirota, James McVinnie, Emily Hall, Jodie Landau, & aYia to the intimate roster.
The collective spirit of Bedroom Community is its most precious resource. The roster is made up of creatively diverse artists who are drawn to the murky spaces between genres, and who uniformly support one another’s forays into this murk.”