i hope it's something like that, it does sound a little alarming, as if some linkage is going to come apart.

magicbastarder said:
the car has developed a very obvious rattle from the rear left when driving over any small bumps in the road. appeared quite suddenly, as in it wasn't there when i was in the car at 5pm but was definitely there at half seven. needless to say, if i look under the car with a torch i can't see a damn thing which looks obvious.
Click to expand...

no thanks, not while driving. they're testing for that now.

therealjohnny said:
With acknowledgements to @Jill Hives
Click to expand... 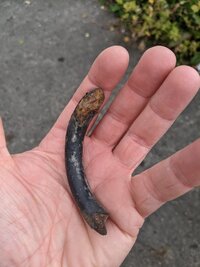 The bottom of the spring from the rear left suspension. It was sitting in a box style suspension arm

Is it an old car? It looks like it came off a classic.

Also, have you noticed that your middle finger and ring finger are the same length?
M

it's an octavia, 2012. also doesn't look like it's the first time that happened, both ends of that fragment look broken.

Looks like it was waterproof coated, which means that once that coating cracks it starts trapping moisture inside the coating meaning it stays permawet. The coating works great till it cracks basically.

They can run pretty well with one break in them. Does either end have any recent shear on it?
M

i'm bringing it back in a couple of weeks to have them replaced, he'd pointed out the last time i'd had the car serviced that this had happened and it's an NCT fail if spotted. apprently it's reasonably common; the younger chap in the garage reached immediately for the right spot when he heard 'rattle from the rear left' as the car was going up on the hoist.
as they pointed out, some people pay to have their car lowered. mine is so cool it does it itself.
M

btw, if anyone is living in D9/D11 area and needs a decent place to bring their car, he's a decent chap; TC motors on Moyle road in glasnevin industrial estate.

ah I was hoping for the remake W123 one

ernesto said:
ah I was hoping for the remake W123 one
Click to expand...