It's a bit weird that the best smiths albums aren't actually the albums (excepting perhaps Strangeways). Hatful of Hollow and The World Won't Listen are The Smiths for me and neither are actually a studio album.

The first album was clearly recorded down the well with a Dictaphone. And both Meat is Murder and TQID sre missing some spark.

As a band they are really poorly represented by their albums.

Mormon Nailer said:
It's a bit weird that the best smiths albums aren't actually the albums (excepting perhaps Strangeways). Hatful of Hollow and The World Won't Listen are The Smiths for me and neither are actually a studio album.

The first album was clearly recorded down the well with a Dictaphone. And both Meat is Murder and TQID sre missing some spark.

As a band they are really poorly represented by their albums.
Click to expand...

hydromancer said:
I gave it another listen this time I used some earphones instead of the crapy speaker on the phone ,it sounded allot better.
Click to expand...

You actually listen to music on the speaker on your phone?

I can't get my head around that at all

GO said:
You actually listen to music on the speaker on your phone?

I can't get my head around that at all
Click to expand...

Well ive no other online access at the minute I did have a conection to put a phone into the stereo amp but it's gone now not sure what this would sound like on it.

Bernie Lomax said:
Think Strangeways Here We Come would have sat better with non Smiths fan Thumpeders to be honest
Click to expand...

you had 20 chances to vote for it

I did vote for this one. If someone says "I've never listened to the Smiths, what album should I get first", TQID is the one. I've heard it loads of times but gave it a fresh spin through from start to finish. I've never realized how much acoustic guitar there is on the album before. Side 2 (tracks 6-10) is nigh on perfect. There are one of those bands, like the beatles or (for me) The pixies, where the amount of great music they produced in a short period of time is so impressive. The light that burns twice as bright, burns half as long.

1 -The Queen Is Dead
Quiet "rockist" for the smiths. Toms with gated reverb & distorted wah guitars. Musically, not their usual melodic fare. Morrissey putting the boot into the royal family. Probably a bit over long but a good into tune. I love the break @ 05:33 with the cymbal wash and then the drums kick back in. "life is very long, when you're lonely"

2 -Frankly, Mr. Shankly
Oompa, Reggae, Smiths style. Lovely bass playing (Andy Rourke is so underrated) Morrissey taking shots at RT head Geoff Travis, unfairly, I would say. But the way Moz sees the world, anyone who doesn't kowtow to his every wish is worse than Hitler. I love the little musical break @ 00:39.

3 -I Know It's Over
Perfect Smiths miserabilism. The reason so many people connected with Morrissey's lyrics, there's a truth and insight in them that only someone who's really been to those places could know.

4 -Never Had No One Ever
This is the weakest track on the album. I do like the music.

5 -Cemetry Gates
"A dreaded sunny day, so I'll meet you at the cemetry gates" Breezy acoustic guitars underpin this song and some lovely subtle melodic fills from Marr.

7 -The Boy With the Thorn in His Side
Another well known smiths track, one I don't tire of. Mainly because of the guitar playing. I love the guitar melody behind the verses, it's really beautiful. That swooning chord @ 00:40 always catches my ear. & when Moz finally shuts up there's that lovely guitar part again. Alas, it fades too soon.

8 -Vicar in a Tutu
Some light relief rockabilly. When he sings "As Rose collects the money in the canister, Who comes sliding down the banister. A vicar in a tutu". I just see Charles Hawtrey flouncing around.

9 -There Is a Light That Never Goes Out
Classic song, but a bit over played for me. Beautiful lyrics. Morrissey at his best. I learnt this on the bass. The little arpeggio @ 01:44 always makes me smile. The snyth strings at the outro. Greatness.

10 -Some Girls Are Bigger Than Others
Lyrically funny, but light and throwaway. A pity because the music is really good. Glacial, chorused, arpeggios, very 80's. I love when Joyce switches to the ride cymbal @ 02:48. I like the delays on the chord stabs.

Frankly, Ms. Tennille: Introducing my Aunt to Morrissey, Part One 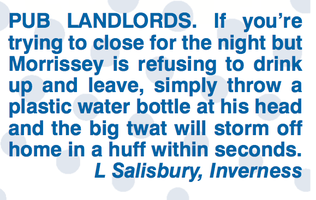 Is that as in Captain and Tennille?
Will give it a read later

This is the only Smiths album I own and the only one I've heard in full. I only like 4 songs off it yet if someone asked me (asked me asked meee) if I liked The Smiths I would say yes - wtf?

Moz pulling a pint in The Thomas House last night

Guinness? Did anyone tell him Guinness isn't vegetarian?

Jaysis I thought that was some old alky helping himself!!
Is that for real?
New posts